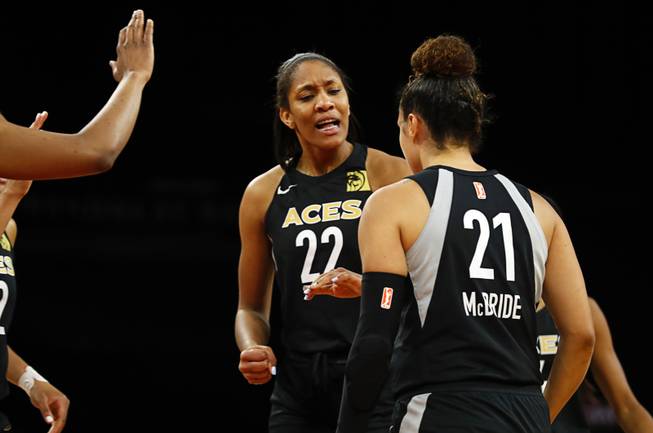 Las Vegas Aces guard Kayla McBride (21) is congratulated by A’ja Wilson (22) and other teammates during a game against the Chicago Sky at Mandalay Bay Events Center Thursday, July 5, 2018.

The Aces’ second season in Las Vegas tips off on Sunday when they host the Los Angeles Sparks (5 p.m., Mandalay Bay Events Center), and there’s a very good chance the campaign will end with A’ja Wilson, Liz Cambage and Bill Laimbeer hoisting the WNBA championship trophy.

As the team embarks on its title quest, we’ve got 17 predictions:

How many games will Las Vegas win this season?

The Aces will go 26-8 in the regular season. Last year’s league leader, the Seattle Storm, posted a 26-8 mark on its way to the championship.

Where will the Aces finish in the standings?

Las Vegas will finish first in the Western Conference and claim the No. 1 overall seed for the playoffs.

How many Aces will make the All-Star game?

Forwards A’ja Wilson and Liz Cambage are locks, as is guard Kayla McBride. But considering the Aces are likely to be atop the league standings at midseason, they’ll probably earn another All-Star representative. Point guard Kelsey Plum is next in line; she averaged 9.5 points and 4.0 assists last year, but more importantly she nailed 43.9 percent of her 3-point attempts. If Plum cashes in on the open looks she gets this year, she could be All-Star No. 4.

Who will lead the Aces in scoring on opening night?

Who will lead team in 3-pointers on opening night?

What will be Cambage’s season high in scoring?

The 6-foot-8 center will post 37 points in a home game against the Indiana Fever on June 29.

What will be A’ja Wilson’s season high?

The second-year forward will total 31 points at home against the Chicago Sky on Aug. 9.

Who will win league MVP?

Cambage is the clear preseason frontrunner. She’s got the on-court credentials after leading the league in scoring last year (23.0 points per game), when she finished as MVP runner-up, and she definitely has the narrative working in her favor. Her trade to Las Vegas was the big story of the offseason, and if the Aces catapult to the top of the standings with Cambage leading the way, that makes her the MVP favorite. All she has to do is produce and the hardware is as good as hers.

When will Las Vegas lose its first game?

After winning on opening night, the Aces will drop game No. 2 at Phoenix on May 31.

What will be the longest winning streak of the season?

After losing to Phoenix, the Aces will roll off 11 wins in a row. They’ll sweep through the month of June, with big wins over Connecticut, Atlanta and Washington before finally falling to the Mystics at home on July 5.

Will Bill Laimbeer be ejected?

No, the fiery head coach will be on hand for the final buzzer of all 34 games. With this roster, what’s to get worked up about?

How will Las Vegas fare against the Los Angeles Sparks?

The Aces will go 3-1 against their rivals to the west, including home wins on Sunday and on Aug. 31. They’ll also win at Los Angeles on June 27. The only loss to L.A. will come at Staples Center on Aug. 1.

Who will lead the Aces in rebounding?

Who will lead the Aces in scoring?

Who will lead the Aces in 3-point field goals?

Who will the Aces face in the playoffs?

After earning a bye into the semifinals, the Aces will defeat the Phoenix Mercury, 3-1. Las Vegas will then advance to the WNBA final to play the Connecticut Sun.

Yes. No other team can match the Aces’ talent level, and all the pieces appear to complement each other perfectly. With an elite frontcourt and a potentially lethal backcourt — all guided by a three-time WNBA champion coach — the Aces will win the whole thing.