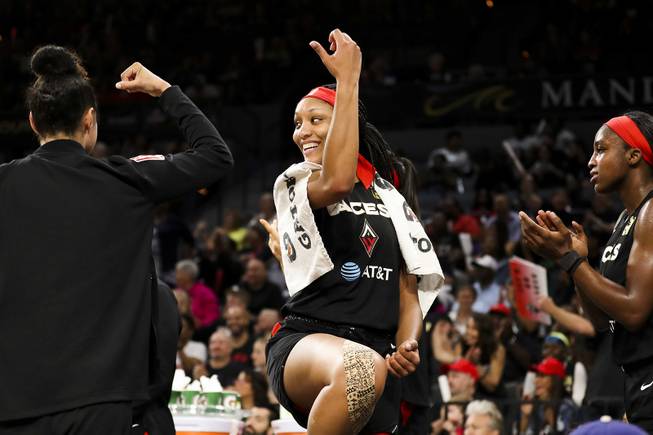 The Las Vegas Aces have the most vaunted starting lineup in the WNBA, with two MVP candidates in the frontcourt, another All-Star scorer on the wing and two former No. 1 overall picks making up the backcourt.

And none of them were on the floor when the Aces seized control of Sunday’s season opener against the Los Angeles Sparks. The stars ceded the spotlight to reserve squad, and the bench powered Las Vegas to an 83-70 win at the Mandalay Bay Events Center.

Forward Dearica Hamby was a force on the second unit, as she led a starter-less lineup on a 13-2 run early in the second quarter to push the Aces’ lead to 40-25.

From there, starters A’ja Wilson and Kayla McBride closed the door by combining for 41 points.

Hamby finished with 12 points, 14 rebounds and two steals in 27 minutes. During her time on the floor, Las Vegas outscored Los Angeles by 20 points, giving Hamby the top plus/minus rating on the night.

The fifth-year forward is embracing her role as the leader of the bench unit.

“I think the bench was amazing,” Hamby said. “I think we picked up the tempo and took the lead and every time we got in the game each one of us just played as hard as we could.”

Wilson, an MVP contender after finishing as the league’s fourth-leading scorer last year, was more than okay with letting the bench do some heavy lifting.

“We credit them with the win today,” Wilson said. “It was really them that kept the momentum going, and we fed off of it.

“There aren’t a lot of teams across the board in any sport that can have a hardcore bench like we do,” she continued. “They really come in and they set the standard.”

This year’s No. 1 pick, former Notre Dame guard Jackie Young, started alongside Plum and finished with eight points in 23 minutes in her WNBA debut.

The Aces only figure to get stronger once prized trade acquisition Liz Cambage is cleared to play. The 6-foot-8 center sat out the opener with an achilles issue but should be ready to take the court soon.

On Sunday, however, it wasn’t Cambage, Wilson, McBride or any of the stars who made the difference.

According to head coach Bill Laimbeer, that bodes well for the Aces.

“I told our players at the start of training camp that I wanted our bench to change the complexion of the game,” Laimbeer said. “That’s what great teams do, and they did that tonight. They came in and turned the game.”