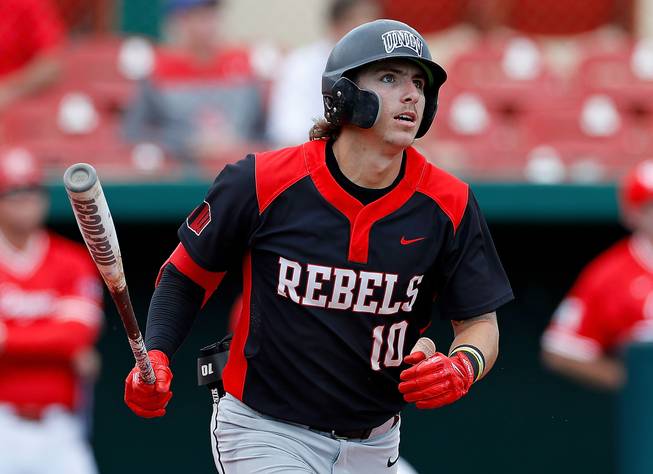 Bryson Stott has already been following in the footsteps of some of baseball’s biggest stars.

Now he’s getting ready to take the next step.

The UNLV shortstop is projected to go in the first round of the June 3 amateur draft, possibly putting him on a trajectory to become the latest star to emerge from Las Vegas, after Kris Bryant and Bryce Harper.

“He works hard and understands his craft, and that’s the difference between Bryson and most people at this level, is he understands who he is, what he can do and how to do it,” said Kevin Higgins, a member of UNLV’s coaching staff who played briefly with the San Diego Padres. “And once you understand those, you have a better chance. Now you couple in the talent that’s off the charts, and now you have a player who’s gonna be a first-round pick and the best shortstop in the country.”

Stott is a semifinalist for the Golden Spikes Award, honoring the nation’s best overall player. He’s also on the shortlist for the Brooks Wallace Award, which recognizes the nation’s top college shortstop. Stott batted .361 this season with 10 home runs and 36 RBIs. He has a fielding percentage of .967.

Though the future looms, he said he’s more focused on leading the third-seeded Rebels in the Mountain West tournament, which begins Thursday. “I haven’t really thought about it, just really not thinking about the what if’s,” Stott said.

Stott’s humility may be his most impressive trait.

“He’s more confident than cocky, and it’s just refreshing. I think people like that,” said Hall of Famer Greg Maddux, a volunteer pitching coach at UNLV. “Nobody likes arrogant players. I think it will help probably just the fact that you don’t have to worry about coaching it out of him. I think one of the worries you have as a coach is you never want to coach personality out of a player unless you have to, and you’re definitely not going to have to with Bryson.”

Like Bryant and Harper, Stott has grown up in Las Vegas. Bryant went to Bonanza High School and ended up at the University of San Diego, while Harper left Las Vegas High after his sophomore year to attend the College of Southern Nevada, where he led the Coyotes to the 2010 JUCO World Series.

The Washington Nationals chose Harper with the first overall selection of the 2010 amateur draft. He signed a 13-year, $330 million contract in the offseason to join the Philadelphia Phillies.

Bryant was taken second overall by the Chicago Cubs in the 2013 draft and made his big-league debut in 2015. He helped lead the Cubs to their first World Series title in more than a century while also winning the NL MVP in 2016.

Stott comes from a tight-knit family that has embedded itself in the community.

His father, Derek, was the starting quarterback at UNLV from 1989-91. His mother, Shana, graduated from the school and is a teacher in the Clark County School District. His sister, Breauna, is a freshman on the UNLV cheer team that won the national championship in January.

“I’ve learned that I’m way more than a baseball player,” Stott said. “I’m a son, I’m a cousin, I’m a friend. Just being able to be with my family and my friends all the time, they don’t really talk about baseball. Having that time with them and letting everything go is just kind of pretty cool.”

Stott said he’s motivated by the memory of his late best friend, Cooper Owen, who died their senior year at Desert Oasis High School. The 21-year-old Stott still wears a remembrance bracelet and has a tattoo on his arm for his friend.

“One of his last messages to me was that he wanted to see me in the majors,” Stott said. “He also knew I’d be at UNLV, and he just told me to keep playing. That’s what he wanted me to do. Playing for him and playing for his family is really what keeps me going, just knowing he’s up there watching.”

Stott said overcoming his friend’s death made him appreciate the sport much more, and it also helped him realize there is more to life than baseball. Perhaps, he said, that’s why he’s grown into the player he is today.

“He plays the game the right way, he’s very special,” Higgins said. “And coupled with his talent, I think his mindset is what helps him do it. Because you would not know. He doesn’t portray that self in the locker room, on the bus, on the planes, in the dugout. He knows he’s a dude, everybody else knows he’s a dude, but it’s not portrayed that way. He’s a humble superstar.”