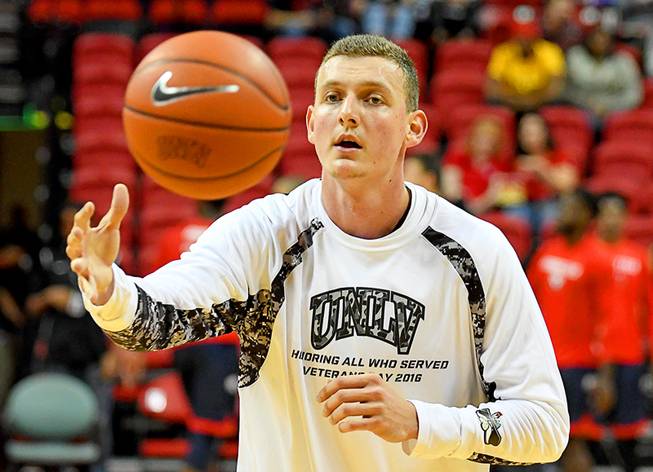 Rebels forward Djordjije Sljivancanin takes a pass from a teammate while warming up for the season opener against South Alabama at the Thomas & Mack Center, Friday, Nov. 11, 2016.

Another roster spot has opened up for UNLV basketball, as head coach T.J. Otzelberger revealed that center Djordjije Sljivancanin is stepping away from the team this season.

Sljivancanin, who signed with the Rebels as part of Marvin Menzies’s initial recruiting class in 2016, will remain enrolled at UNLV and continue to work toward his degree.

Sljivancanin received almost no playing time in his three years on scholarship. He got into 10 games as a freshman and logged 47 total minutes, and his next two years were marred by injuries.

UNLV now has 12 players under scholarship for the 2019-20 season. Otzelberger said he is open to all possibilities, be it a transfer who could play right away, a sit-out transfer, a high school recruit or even leaving the scholarship open into the season.

“If we don’t fill the scholarship it’s not the end of the world,” Otzelberger said. “I don’t think we’re in a spot where we feel like we have a major hole anywhere. We can be patient for the right player.”

So far this offseason the Rebels have added five players, all from the collegiate level. Jonah Antonio is a junior college transfer, David Jenkins and Moses Wood are sit-out transfers and Elijah Mitrou-Long and Vitaliy Shibel are grad transfers.

Otzelberger said the quality of the player and the system fit will determine whether UNLV fills the remaining scholarship over the summer.

“A lot of times when you have one scholarship, you want it to be an impact player,” Otzelberger said. “So you want to be patient to make sure that you get the right player. I don’t think there’s any rush at all.”

UNLV is currently slated to have 10 active players for 2019-20 and two redshirts (Jenkins and Wood). Regardless of what happens with the final scholarship, Otzelberger is confident in his roster as it stands today.

“I like our squad,” he said. “We have 10 guys that are available to play right away, with Moses and David having to sit for the year, so I really like those 10. We’ve got a nice blend of experience, guys who have been here as well as some newcomers. If that’s our squad on Day 1, we’re excited about it. And if we can add one piece, that’ll be something that we look into.”