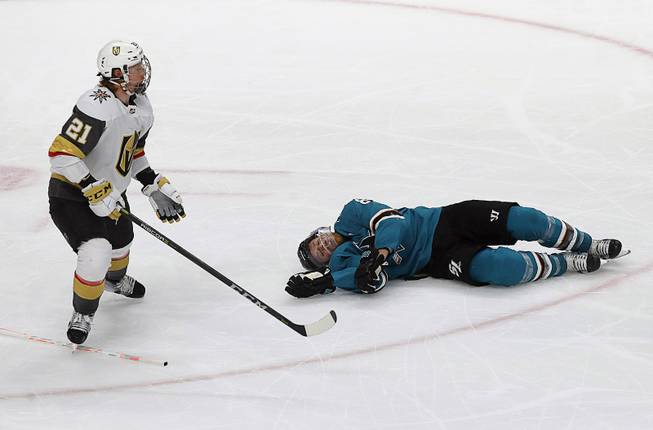 During his annual speech prior to Game 1 of the Stanley Cup Final, Bettman said general managers will discuss potential expansion of video review next month. He didn’t even wait for questions from reporters to address the issue that has been something of a cloud over this postseason.

“The ability to review and parse plays down to the millisecond has become both a blessing and a curse,” Bettman said. “If we are to extend video replay, and we will be looking at that possibility, we must find the right balance when it comes to how much more to use and when to use it without affecting the flow, pace and excitement of our game. …

“What I can say with absolute certainty is everyone involved is going to take a hard look at this issue in the upcoming months. No one should doubt that we want to get it right.”

With Vegas leading 3-0 in Game 7 in the first round, Cody Eakin was assessed a major penalty for a hit on San Jose’s Joe Pavelski that the league later told the Golden Knights was not the right call. The Sharks scored four times on the ensuing major penalty and won 5-4 in overtime.

San Jose also won Game 3 of the Western Conference final after officials missed a hand pass immediately before the overtime winner. A hand pass is not subject to review, and Bettman said he, Deputy Commissioner Bill Daly, director of hockey operations Colin Campbell and director of officiating Stephen Walkom were all unhappy with what transpired.

“What I thought was it would be good if I kept my head from exploding,” Bettman said. “It was unfortunate to say the least. It was clearly a missed call and it led to a goal. You don’t ever want to see a game decided like that.”

Currently, only goals can be reviewed — either by the situation room in Toronto or by coach’s challenge for offside or goaltender interference. Bettman did say the NHL likely won’t go backward and reduce what can be reviewed.

“I don’t think you can go backward anymore,” Bettman said. “I think that ship has sailed. Frankly, we want to get it right.”

“Get rid of the video reviews,” Marchand said. “That’s the problem. When you start bringing in all the video reviews, the refs start getting crucified. They’re out there to do a job, you start taking it way from them little by little then it’s going to escalate. Now they’re gonna want video review for pucks in the net or hand passes, so how much are you going to take away from the refs?”

And how much time might it add to games? Bettman said the league is “very” concerned about the adverse effect of slowing down the fastest game on ice. But as the NFL makes pass interference subject to review and other sports leagues ramp up use of video to get calls right, the pressure is on the NHL to do the same.

“We have to go back and maybe come up with some common sense that improves the system,” Daly said.

Notes: Daly said the NHL won’t stage preseason games in China for a third consecutive year, citing concerns about being able to plan correctly as the country celebrates the 70th anniversary of the rise of communism there. The NHL continues to put down roots in China, which is hosting the 2022 Winter Olympics in Beijing, but Bettman said the league’s stance on Olympic participation hasn’t changed after skipping the 2018 Pyeongchang Games.

“I’ve been in this rodeo before,” Fehr said. “You get ready. You notice what your deadlines are. You do your work. You talk to the other side. You consult with your membership. And then you end up doing what the right thing to do is at the time.”