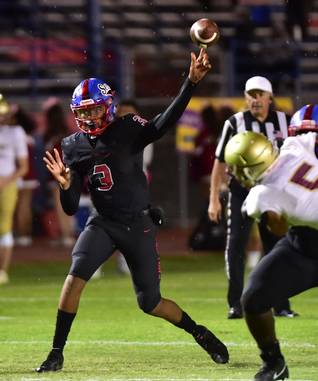 Doug Brumfield, a three-star recruit for 2020, verbally committed to UNLV football over offers from Kansas, Rutgers, Utah and UNR.

Rain started to come down hard before the start of this Junipero Serra High football game. But quarterback Doug Brumfield didn’t seem to be bothered.

He completed 16 of 23 passes for 283 yards and three touchdowns that evening last fall, giving a glimpse of his off-the-charts talent under center. The southern Californian verbally committed to UNLV last week.

“Doug’s a special player,” Serra coach Scott Altenberg told the Daily Breeze of Torrance, Calif., after that game. “I’ve had a lot of great quarterbacks. He is only a junior and his next-level thinking is unbelievable. In the second half, he made a couple of adjustments that we never even talked about. He did it seamlessly.”

The 6-foot-5, 215-pound Brumfield has drawn comparisons to Randall Cunningham, arguably the greatest Rebel of all-time who went on to a lengthy NFL career. Like Cunningham, Brumfield is tall, lanky and athletic. His long throwing motion also looks similar.

“It’s a blessing (to hear those comparisons),” Brumfield said. “I try to model my game after him and other quarterbacks of that era.

Brumfield is one of the most highly regarded prospects to commit to UNLV in the five-year tenure of coach Tony Sanchez. Brumfield is a three-star recruit by 247Sports and had scholarship offers from Kansas, Rutgers, Utah and UNR. Yet, he picked UNLV — with the help of another top Sanchez recruit, standout quarterback Armani Rogers.

“I talked to Armani after the spring game. He told me UNLV is a great place to be for a franchise quarterback,” Brumfield said.

His commitment gives the Rebels depth at the position, which can’t be overlooked considering that a UNLV quarterback hasn’t started every game in a season since the 1990s. Rogers and Max Gilliam, who passed for 14 touchdowns in nine games last season, are both juniors. Redshirt freshman Kenyon Oblad was Nevada’s all-time leading prep passer and could be the starter in 2021.

That would give Brumfield time to develop into that franchise quarterback he envisions becoming.

“I see myself fitting in at UNLV,” he said. “I enjoyed it there. It’s not too far from home (in Gardena, Calif.,) but far enough away.”