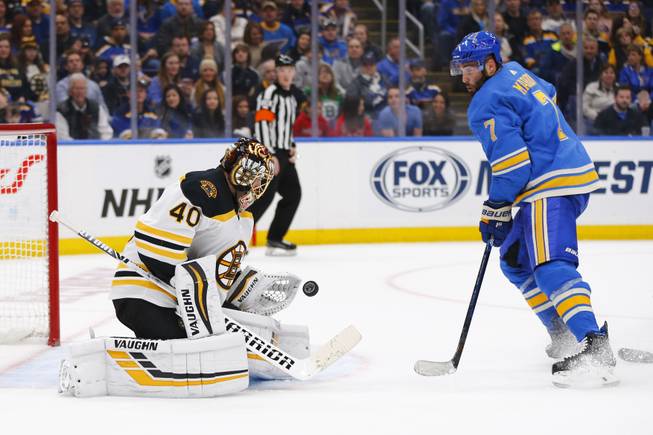 In this Feb. 23, 2019, file photo, Boston Bruins goalie Tuukka Rask (40), of Finland, makes a save against St. Louis Blues’ Patrick Maroon (7) during the second period of an NHL hockey game, in St. Louis. The Bruins and Blues will meet in the Stanley Cup Final, a rematch of the 1970 series that ended with Bobby Orr s famous goal and leaping celebration.

Game One of the Stanley Cup Finals, Blues at Bruins, Total Under 5.5 at minus-130, $390 to win $300: Handicapping hockey isn’t my strength — so, please, don’t use this recommendation when attempting to rebuild your bankroll after a long holiday weekend.

Here’s my best guess: The Bruins have gone under the total in 11 of their 17 playoff games, and tend to play their best in closely contested matchups. Expect Game One of the Stanley Cup Final to be just that — physical, hard-hitting and low-scoring. Both teams should take a conservative approach as they feel each other out.