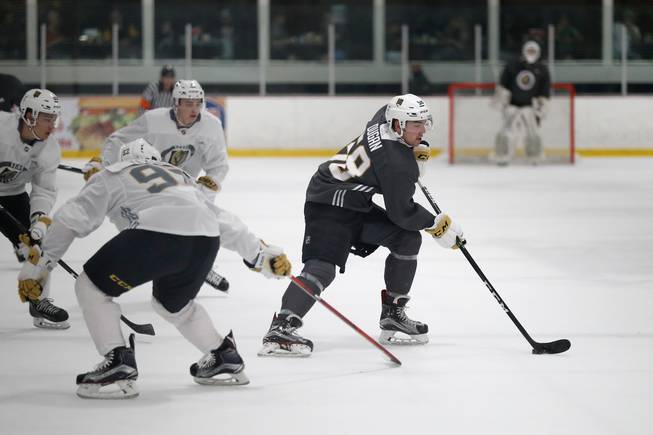 Golden Knights forward Jack Dugan (58) controls the puck during a scrimmage at the team’s development camp on July 1, 2017, at the Las Vegas Ice Center.

Four weeks from today, hockey comes back to Las Vegas.

The Golden Knights announced today that development camp will run June 25 to 29 at City National Arena. A full roster will be released after the 2019 NHL Entry Draft, which begins June 21.

Development camp is the best chance for fans to see future Golden Knights, as all practices are free and open to the public. There will be joint scrimmages on Thursday, Friday and Saturday that week. Tickets are free but will be distributed through Flash Sheets.

It gives the Golden Knights a chance to bring in college players as well, like when defenseman Jimmy Schuldt attended last year’s camp. He signed as an unrestricted free agent with Vegas on April 3 and played in the last game of the season.

Glass, Hague, Elvenes and Whitecloud figure to be back this year, as well as the Golden Knights’ draft picks. They will select 17th at the draft in Vancounver on June 21 and 22.

The development camp schedule is as follows: