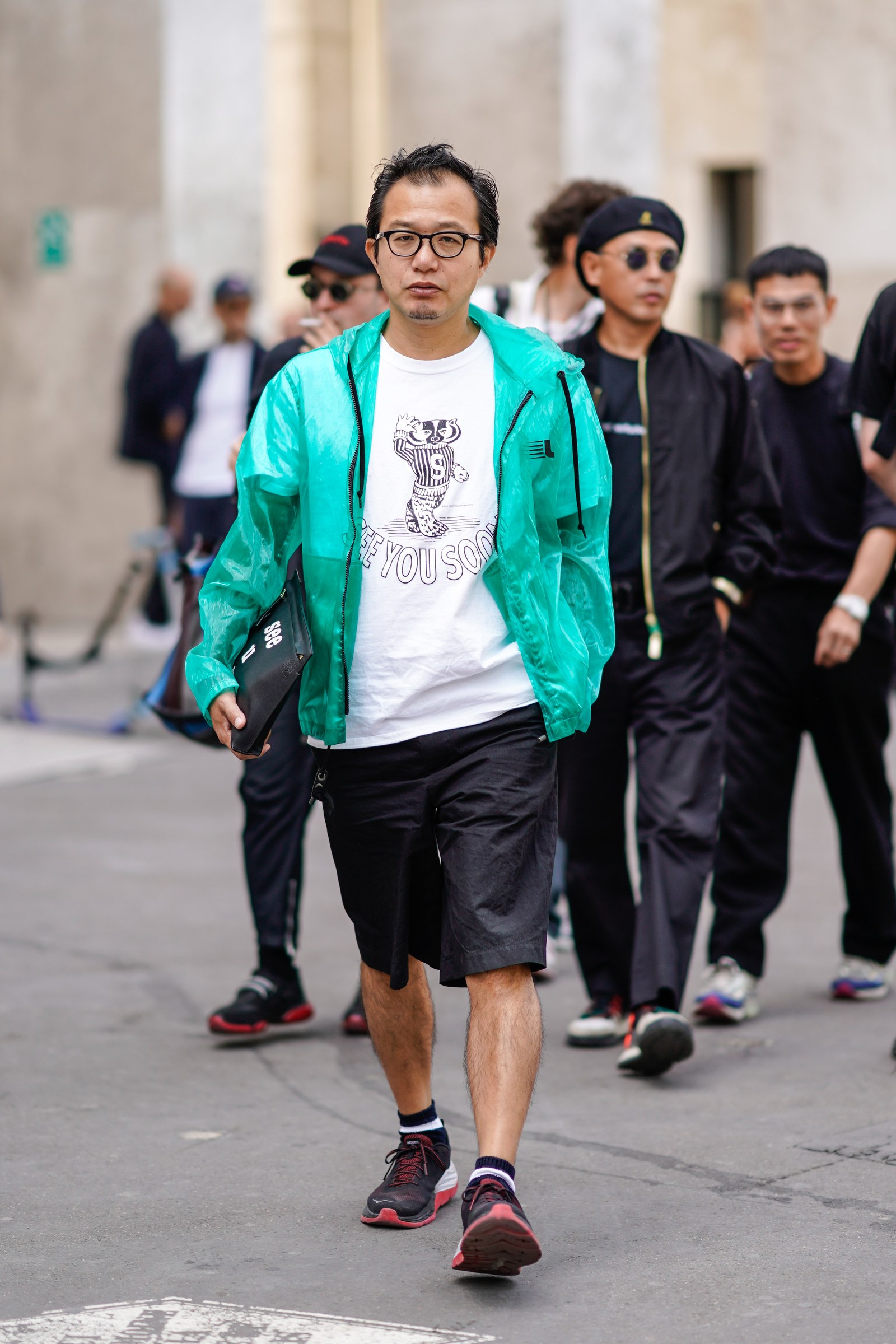 You know the look. You fear the look: the giant khaki short. The pair that skims the lower reaches of your kneecaps, perhaps even hitting high on your shins, like a hot divorcée’s capri pants—only comically wide instead of enviously slim. They are cousins to the Bermuda short, and yet slightly…un-human. Inhumane, even. Maybe they have a pleat. Maybe they are even so big that they flare out a little bit at the hem, like an obsolete medieval instrument that’s played when a really mediocre overlord acquires more land.

These shorts fly in the face of all that is stylish. Some might say that, as shorts make their way back into cool guys’ wardrobes, these shorts represent everything well-dressed men have left behind. But in this golden age of men’s fashion, these shorts are still here—except now they are $550, and made by the European minimalist design house Jil Sander.

While high fashion has sprinkled its fairy dust over everything from fleece jackets to cargo pants to (formerly) embarrassing sneakers, big shorts have somehow remained the last faux pas. “I think that there was this kind of taboo for a long time around men showing their legs,” says Peter Haury, a men’s merchant at the fashion bellwether stores Totokaelo and Need Supply. Eon Huntley, a brand specialist at The Row at Barneys Madison Avenue, adds: “Shorts have become synonymous with things like cargo shorts, or styles that men who are not necessarily the most fashionable people wear. So I think that it’s hard for men to separate that thinking as well.”

But now some of the most exciting innovators in fashion are doing some of their best work in shorts. There’s Jil Sander, which since the fall of 2017 has been led by former Supreme designer Luke Meier and his wife, Lucie Meier, the former head designer at Dior. But there’s also the Japanese stalwarts—Comme des Garçons, Issey Miyake, and Yohji Yamamoto—as well as younger brands reinventing tailored basics like Ludovic de Saint Sernin. This season Totokaelo has roomy, almost louche shorts from all these designers, but not just because guys are more willing to fork out the big bucks for casual clothing. The advanced short suit has arrived—and it’s not whatever you were forced to wear for your fraternity brother’s wedding on Martha’s Vineyard (#AShortThingALongMarriage, or whatever). “We’re seeing so much creativity in suiting and what that can mean—the versatility around how a man can dress,” says Haury. “Shorts are a nice option that you can layer in there.” For brands in the Comme family, like Miyake and Yamamoto, “we have a jacket and then a matching short and a matching pant.”

Even at Mr. Porter, which carries a slightly more conservative offering of menswear, there are jumbo board shorts from Blue Blue Japan, Dries Van Noten, and Loewe, and crazy prints from Needles and Wacko Maria.

But this is not just about “any” old funky short. The desired silhouette is voluminous, almost anti-cool. It borrows from both the squareness of the dad khaki and the coolness of swishy mesh basketball shorts. There is also this Issey Miyake pair in the designer’s classic plissé (the schmancy French word for micropleats), and Yohji Yamamoto’s take on Bermuda shorts, with an asymmetrical apron wrap at the front. Rick Owens has been here the whole time, of course.

This particular wave began with Comme des Garçons’ Spring 2018 collection, which put sequined and animal-print jackets and oversize shirts together with big, bad sequined shorts in the-Candy-Man-can colors: royal blue, Prince purple, springy green, and pungent cotton-candy pink. They were glittery and swingy, offering the freedom of a skirt and the sure-dude tranquility of lacrosse shorts. A few pairs weren’t in sequins but instead were juiced up with pannier-like compartments—cargo pants for the French Revolution. Volume was everything!

That show, in which models danced to disco music as neon lights swirled overhead, reasserted that shorts are fun, and easy, and casual. And if that didn’t convince you, perhaps Frank Ocean on the cover of 032c a few months later did. Marc Jacobs began his ascent to full-on fashion-influencer-slash-archivist by buying the sequined suits in nearly every color, and Ocean continued to wear them on his own time, advancing the dressed-up-basketball-short vibe.