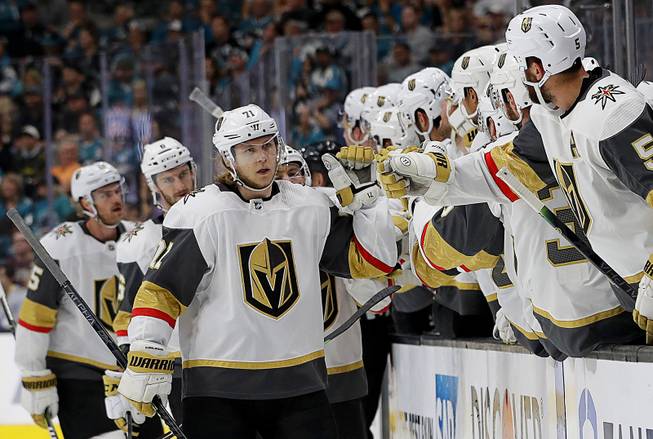 Vegas Golden Knights center William Karlsson, center, is congratulated by teammates after scoring a goal against the San Jose Sharks during the first period of Game 7 of an NHL hockey first-round playoff series in San Jose, Calif., Tuesday, April 23, 2019.

It’s no secret that the Golden Knights find themselves in a salary cap crunch for next season.

Remarkably, Vegas is already over next year’s cap before the offseason even officially begins, so it’s going to take some financial Tetris to make everything work. Just how much space do the Golden Knights need to clear? And how can they do it?

The Golden Knights are currently $125,000 over the cap of $83 million, according to CapFriendly.com. That’s with 19 players on their roster, so they will need to add four to that, meaning that not everyone currently on the team will see the training camp.

Here’s one way the roster could next season. It will work, but it won’t make everyone happy.

Note: To reduce the amount of variables and guesswork, this exercise includes only players already in the organization. It does not factor in anyone who may be acquired via trade or free agency. Cap numbers are estimates based on track record and league-wide comparisons and projection charts and could obviously fluctuate even to a large degree. This is intended for approximation purposes.

First off, the current $83.125 million cap hit assessed to the Golden Knights is not entirely indicative of where their cap situation stands.

The cap number includes $5.25 million owed to David Clarkson, who has not played since 2016 and is currently a high school coach in Ohio. The Golden Knights will place him on long-term injured reserve and though there is a more complicated procedure, it essentially allows the team to recoup his cap hit.

That $5.25 million will more than cover the three cheaper restricted free agents, as a projection from Evolving Wild tabs Tomas Nosek at $1.85 million and Jimmy Schuldt at $900,000. The chart does not include Subban, but the going rate last year for a backup goalie yet to hit free agency was between $900,000 and $1.5 million, so we’ll split the difference and give Subban $1.2 million. That gives Vegas $1.175 million in cap space.

The two more expensive restricted free agents will be more of an issue: William Karlsson and Nikita Gusev.

Brock Nelson’s new contract with the Islanders could serve as a starting point for Karlsson. The New York center’s new deal is for a reported six years at a $6 million cap hit. He and Karlsson had a similar point total last year and Karlsson is a year younger. Factor in Karlsson’s 43-goal campaign two years ago and his terrific defense, and Karlsson should get a tad more.

Let’s say the Golden Knights work out a deal with Karlsson for six years with a cap hit of $6.5 million.

It’s hard to pinpoint just how much Nikita Gusev will make as a restricted free agent. Players of his caliber typically play in the NHL on an entry-level deal before needing another contract, but Gusev poses an interesting case.

Florida’s Evgenii Dadonov might be the closest comparison. He has a similar profile, and even though he played stateside, he went back to Russia and earned a new contract as a 28-year-old unrestricted free agent based off stellar Kontinental Hockey League numbers.

As a restricted free agent who is not eligible for an offer sheet, the 26-year-old Gusev has less bargaining power than Dadonov did. So expect less money coming his way, even if his KHL numbers were better and a younger age. For the sake of this story, we’ll give Gusev a three-year deal with annual cap hit of $3.5 million.

If Karlsson and Gusev come in at $10 million combined, that puts Vegas at a $91.825 million cap hit without factoring in unrestricted free agents Deryk Engelland, Pierre-Edouard Bellemare, Brandon Pirri and Ryan Carpenter.

Pirri is unlikely to return. There is little space for a scoring winger who factors into the middle six, and he figures to have other options.

Carpenter could come back, as the team liked his defense and versatility. The Golden Knights could also decide Curtis McKenzie, who is under contract for next year at a $750,000 cap hit and played all year in the AHL, shares a similar profile to Carpenter and move on from the latter.

Engelland and Bellemare are bigger question marks. They are both terrific defensively, wore the “A” on their sweaters this year and are respected in the room. Both expressed a desire to return, and Evolving Wild tabs Engelland for $1.9 million and Bellemare at $1.45 million.

They could choose to not retain some of their free agents. If they trade the rights to Karlsson and Gusev, they will be very close. They could save relative pennies by keeping Schuldt in the minors and bringing up a player on a minimum deal, which for next year will be $700,000. Both those outcomes are unlikely.

The Golden Knights could make a trade. Reports have defenseman Colin Miller and his $3.875 million cap hit on the trade block, and Vegas could look to shop the expiring contracts of Cody Eakin ($3.85 million) and Ryan Reaves ($2.775 million) as well.

The buyout could help save some space as well. Based on his cap hit, length of contract and depth at the position, defenseman Nick Holden is the likeliest candidate. If he is bought out, Vegas would recover $1.2 million of his $2.2 million cap hit, and take a $600,000 cap penalty in 2020-21.

If the Golden Knights sign all their restricted free agents, trade Eakin, Miller and Reaves for futures without retaining salary, decline to re-sign Engelland, Bellemare, Carpenter and Pirri, keep Holden, and give roster spots to three players on deals close to the league minimum, it makes Vegas cap-compliant with a grand total of $113,333 left over.

The chart below approximates a possible lineup, from CapFriendly’s Armchair GM tool.

That’s not a bad squad. The top-six forward group stays intact, and Gusev, Erik Haula, and Alex Tuch form one of the league’s more potent third lines along with a fourth line that was all on the team last year.

Nate Schmidt and Schuldt combine for a tongue-twister of a defensive pair, Shea Theodore and Brayden McNabb pick up where they left off last year, as do Holden and Jon Merrill.

The goalies stay the same.

The issue is depth, where none of the scratches saw a game for the Golden Knights last year. It’s worse on the blue line, where two of the seven defensemen combine for one career NHL game. That can be remedied by bringing in a player on a near-minimum deal, either by free agency or trade.

This scenario allows top prospect Cody Glass to open the season in the minors, which Vegas as shown a wont to do with their top prospects, dating back to Tuch and Theodore two years ago. They have enough cap space to add his $863,333 cap hit by swapping him with anyone else.

It requires quite a bit of assumption when it comes to trades, like that the Golden Knights will find takers for their three traded players, only receive futures and no players coming back, and that they don’t retain any salary.

But it sets them up well for the future, with $73.7 million in commitments for 2020-21. Haula will be the only major player in need of a new contract and no one is currently in line for a raise. If the cap increase follows the same rate of increase that has over the last five years (3.77 percent average increase), the cap will be about $86.1 million in 2020-21, giving the Golden Knights $12.4 million to play with next summer.

And obviously it’s not perfect. Odds are, the Golden Knights will want to find a way to bring back Engelland or Bellemare or both. They could make space by trading further from forward depth, perhaps even a big splash like Reilly Smith or Jonathan Marchessault. They could try to bring in another top-four defenseman. They could save money at goalie and go with Oscar Dansk as the backup.

Vegas will be tight up against the cap this summer. Last year more space allowed for the acquisitions of Paul Stastny and Max Pacioretty, but this year president of hockey operations George McPhee and general manager Kelly McCrimmon have some work to do in order to get under the cap and keep this team in the hunt for a Pacific Division title.