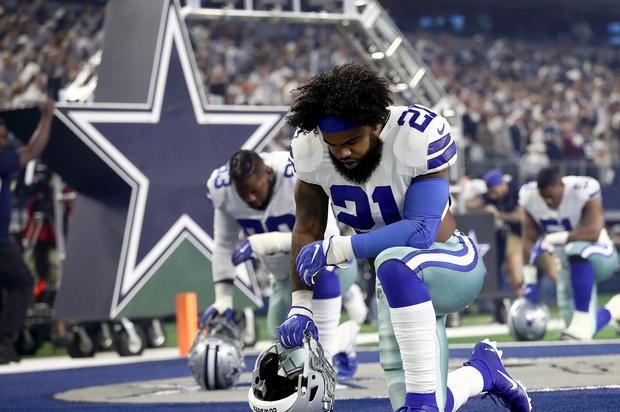 Elliott was not arrested or charged for the incident originally.

Last week, a video surfaced of Dallas Cowboys star running back Ezekiel Elliott being handcuffed at EDC in Las Vegas. Elliott can be seen on video going chest to chest with a security guard who eventually falls onto a rail and then to the pavement. Elliott was put in handcuffs although was never formally arrested and was eventually let go with no charges being pressed against him.

Kyle Johnson, the 19-year-old security guard who got pushed in the video, is now thinking of pressing formal charges against Elliott unless he gets a proper apology, according to TMZ. As Johnson explains, Elliott did give him an apology, although he didn’t feel like he truly meant it.

“I did get an apology from him, it wasn’t a sincere apology. He didn’t maintain eye contact. It didn’t seem sincere at all,” Johnson said. “I wasn’t hurt or anything but to have someone that you looked up to shove you on the ground over a metal fence? It’s not the biggest thing in the world … but [to say] nothing happened? I mean, come on.”

Johnson said he never pressed charges at the time of the incident because it was 3 in the morning and he didn’t want to make an emotional decision.

Only time will tell whether or not he goes through with these charges.