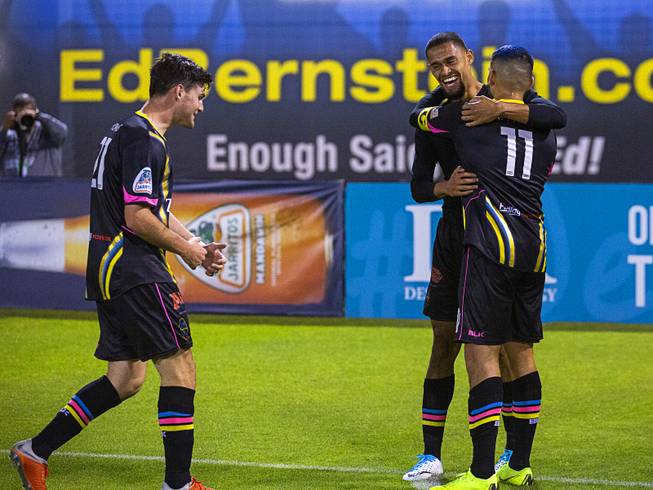 Las Vegas Lights’ Irvin Parra (11) is congratulated by teammates after scoring against the Tacoma Defiance at Cashman Field Saturday, April 13, 2019. The Lights shut out the Defiance 5-0.

Las Vegas is taking another stab at bringing Major League Soccer to the city.

The Las Vegas City Council will consider a proposal next week to enter into a negotiating agreement for a downtown stadium and to make a pitch to the MLS to turn the Las Vegas Lights FC into an expansion team, the city announced today.

The Lights play in the United Soccer League, the level right below MLS for American professional soccer.

If approved Wednesday, the city would enter into a 180-day negotiating period with Renaissance Companies Inc. to create a master plan for a mixed-use development with a stadium. It would be located on 62 acres where Cashman Field, the home of the Lights, is located.

The city described the proposed project as a “mixed-use live, work and play development.”

Financial plans for the stadium would also need to be agreed upon.

Lights owner Brett Lashbrook, meanwhile, said he has entered into a sale agreement for the team, contingent upon the city and developers finalizing an agreement for the master plan. He did not disclose any details about the proposed sale, including the potential buyer.

Lashbrook said he expected the council to approve the agreement and was excited for the growth of soccer in Las Vegas. “This is amazing for not just our team and our fans but the neighborhood and the city,” he said.

Five years ago, Las Vegas attempted a bid for an MLS team. Developers proposed a $201 million stadium, of which the city of Las Vegas would pick up 76 percent of the cost and own the stadium. City officials said they expected the split to be closer to 50-50.

Las Vegas Mayor Carolyn Goodman and her predecessor and husband, Oscar Goodman, have been angling for a major league sports team for nearly two decades, though the last push for an MLS team came before the Golden Knights and Raiders were pegged for the area.

MLS has been expanding at a rapid rate since it began with 10 teams in 1996. There are now 24 teams, with plans to expand to 30 within the next few years. The league is adding two teams next season and another in 2021, with a 28th and 29th shortly thereafter.

Most of the cities have been decided upon, but not the 30th. MLS Commissioner Don Garber said last month Las Vegas would merit consideration.

“I don’t know that we have a firm handle yet on what the final number of teams in the league ought to be,” Garber said on April 19. “We of late have been in very positive discussions in Las Vegas and in Charlotte. We still believe Phoenix is a good market. We have been in discussions with Detroit. I will say that we are going to take our time on team 30.”