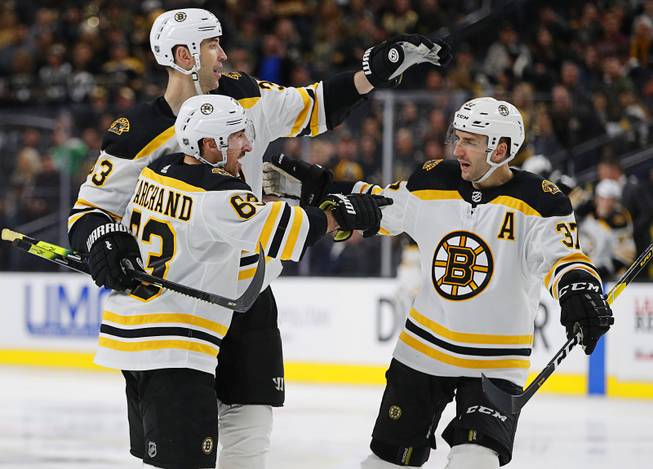 Boston Bruins left wing Brad Marchand (63) celebrates with teammates Zdenoa Chara, back left, and Patrice Bergeron after scoring against the Vegas Golden Knights during the third period of an NHL hockey game Wednesday, Feb. 20, 2019, in Las Vegas. The Bruins beat the Golden Knights in a shootout.

The Bruins are the better team in this series, and they showed it in Game 1, when St. Louis got all the breaks and Boston still emerged with a 4-2 victory. In the second period — after Boston had sufficiently knocked off the rust of an 11-day layoff — the Bruins outshot St. Louis 29-7 and racked up a 7-0 advantage in high-danger scoring chances. It was total domination.

Can the Blues bounce back and make a series out of this? Possibly. But if that happens, it would happen at home in St. Louis in Games 3 and 4. Tonight, in Boston, with everything working in the Bruins’ favor, the superior team will win big again.