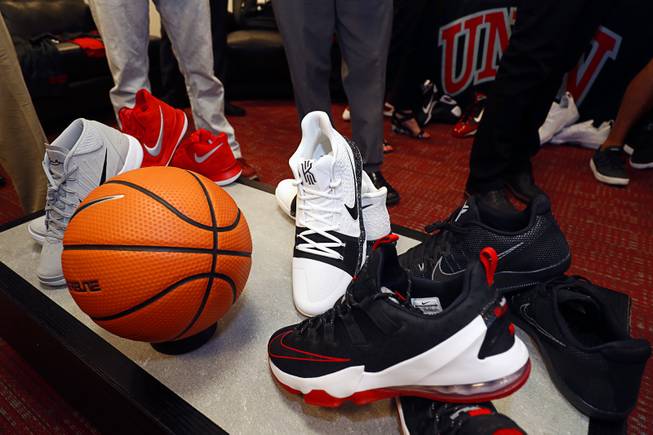 After months of speculation, UNLV will announce its next sports apparel contract sometime in the next week. Shoe deals can be highly influential in the world of college athletics, and with multiple companies jostling for position, the dollar amounts seem to keep going up.

What impact will the next apparel deal make on Rebels athletics? Let’s cover the key questions:

What is an apparel contract?

Also known informally as a “shoe deal,” an apparel contract gives a brand (such as Nike or Adidas) exclusive rights to outfit a sports program. The apparel company provides uniforms, sneakers, equipment and other accessories to the university, and in exchange the brand gets to plaster as many swooshes and stripes on the jersey as they want.

In some cases, when an athletic program is viewed as having brand value, an apparel company will pay cash to the university in addition to the gear.

What are the details of UNLV’s current deal?

UNLV’s current contract is with Nike and is set to expire on May 31. Under the terms of that five-year deal, Nike provided apparel for all of the Rebels’ sports teams (up to a value of $1 million per year). No cash was included in the compensation.

How lucrative can apparel contracts be?

Mountain West programs can’t expect to rake in anywhere near that much money. Boise State is the conference’s top earner by virtue of a 6-year deal with Nike that is worth $2 million per year, but the rest of the MWC doesn’t have Boise’s powerful football brand. Last year, UNR jumped from Nike to Adidas for a deal worth a reported $6.3 million over seven years.

What do players think about the next shoe deal?

“They’re excited about gear,” Otzelberger said. “You see every time there’s a new pair of shoes, how excited they get. There are different companies that they enjoy more for one reason or another, because of the superstars they watch on TV. To me, it’s part of our program but it’s not at the forefront of anything we’re doing or the decisions we’re making.”

Does it impact recruiting?

Much the way they align with college programs, shoe companies also sponsor AAU teams and organize grassroots tournaments during the summer. By doing that, they hope to build relationships with young players in hopes that some of them eventually develop into pro superstars while remaining loyal to the brand.

Because of those relationships, every time an elite prospect is readying to make his college decision stories will emerge about how they are considering or excluding certain programs based on their shoe affiliations. According to those rumors, a player who came up with a Nike AAU team is unlikely to commit to an Under Armour college, etc.

Otzelberger said he doesn’t believe shoe deals hold that much sway over recruiting.

“I don’t think it’s all that impactful,” Otzelberger said. “Certainly if you look at the marketplace in AAU basketball, Nike probably holds more of the market share, and on their EYBL circuit there’s probably more of the elite players. But at the same time, Adidas and Under Armour still garner a percentage of that market share as well. So common sense would tell me that if there’s more good players on Nike, then the fact that those kids grew up wearing Nike might make them excited to wear Nike [in college]. But I haven’t personally seen it impact the recruiting I’ve done at the places I’ve been.”

Who are the candidates for UNLV’s next shoe deal?

Nike and Under Armour appear to be the top suitors. UNLV has been a Nike school for decades and that relationship runs deep, but Under Armour has been throwing around cash in its recent deals — something that Nike did not offer in its last contract with the Rebels.

Whoever pays the most. If Nike’s best offer is similar to the last contract — which included no cash for UNLV — it seems likely that Under Armour would be willing to beat it. The Rebels’ financial ledger is not so robust that they can afford to pass on a deal that puts a million dollars on the table.