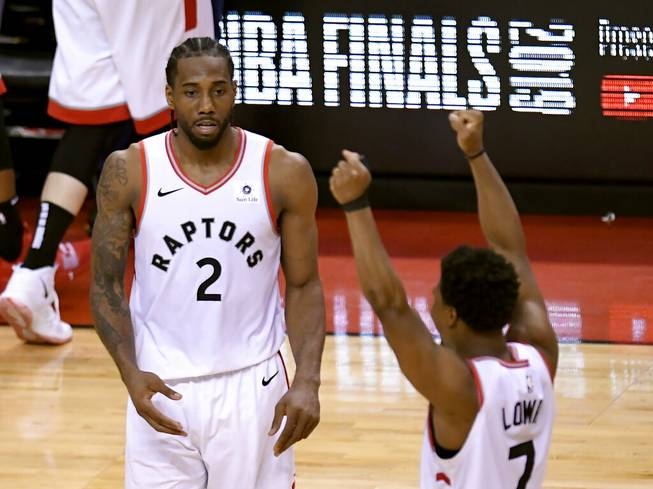 Toronto Raptors’ Kawhi Leonard (2) and Kyle Lowry (7) react during the second half of Game 6 of the team’s NBA basketball playoffs Eastern Conference finals against the Milwaukee Bucks on Saturday, May 25, 2019, in Toronto. The Raptors won 100-94 to advance to the NBA Finals.

If all basketball fans wanted was some semblance of a challenge for the Golden State Warriors to win their fourth NBA championship in five years, then they’ve got it.

The Warriors’ series with the Toronto Raptors, which begins at 6 p.m. tonight and airs on ABC, is not a foregone conclusion. Not according to the betting market anyway.

That’s not the biggest favorite Golden State has been during its dynasty — it was minus-1000 ahead of last year’s sweep of Cleveland. It’s also not the most vulnerable the Warriors have ever been going into a championship series, as they were only minus-190 ahead of the first meeting of their tetralogy with the Cavaliers.

Odds-wise, this year’s NBA Finals are right in line with two years ago when Golden State closed in the same range ahead of avenging its previous defeat to Cleveland in five games. A decent portion of brave, and ultimately mistaken, souls backed the Cavaliers in 2017 to keep their price hovering beneath plus-250.

The same is true with this year’s Raptors, and for the same primary reason. The oft-cited reason for the Cavaliers’ chances was that they had the best player in LeBron James, just like the Raptors now have the perceived top talent in Kawhi Leonard.

It’s been quite the postseason for the 2015 NBA Finals MVP as he’s seen his stock rise to unprecedented levels heading into free agency. Many are now calling Leonard the best player in the world after delivering Toronto to its first Finals.

That might be up for debate, but with Kevin Durant still nursing a calf injury to leave his status undetermined, it’s inarguable that Leonard is the most valuable player in the series.

Two-time NBA MVP Stephen Curry is favored to win his first Finals MVP at minus-180 at William Hill sports books, but that’s a pretty steep drop in price compared to the Warriors’ odds to win the series. There’s less of a difference between Toronto’s number and Leonard’s plus-260 to win MVP.

Translation: Almost the only way the Raptors beat the Warriors is if Leonard continues and even eclipses a torrid playoff pace that’s seen him average nearly 31 points, nine rebounds and eight assists per game while shooting above 50 percent.

Of course, Leonard alone isn’t enough to explain 49 percent of the series bets at William Hill being on Toronto. There are other factors working in the Raptors’ favor — including a big one the Warriors have never faced before.

For the first time, Golden State will have to win a Finals series without home-court advantage. That makes this the first NBA Finals since 2008, when the Big Three Boston Celtics upset the Kobe Bryant-MVP season Los Angeles Lakers, that the home team comes in as an underdog.

It’s not exactly a crippling disadvantage, as dating back to that series 11 years ago, three teams have overcome the road — the 2016 Cavaliers, 2012 Heat and 2011 Mavericks — to become champions. Golden State has also played better away from home this year, including going 6-2 straight-up and 4-3-1 against the spread in the playoffs.

A bigger issue might be the Warriors’ health and depth. Although there’s talk of both Durant and Demarcus Cousins returning at some point during the series, there’s nothing concrete. The Raptors’ reserves have been more reliable on the season as a whole, though the recent emergence of Warriors bench players like Kevon Looney and Quinn Cook puts the edge more into question.

Toronto was also the only team to sweep Golden State in the regular season, though that’s somewhat misleading. As impressive as the Raptors’ 113-93 win at Oracle Arena was in December regardless of circumstance, their earlier 131-128 overtime victory at Scotiabank Arena doesn’t hold up to as much scrutiny.

They were 9.5-point favorites that night against a Warriors’ team without three of their starters — Curry, Cousins and Draymond Green.

But Golden State is not in another league than Toronto, and the betting market realizes as much. Westgate Las Vegas Superbook had Golden State as high as a minus-310 favorite before the odds trended downwards.

The Game 1 spread opened at Golden State minus-1 before flipping to slightly favor Toronto.

Finals matchups have typically been more unpredictable than advertised too. Before Golden State’s last two championships since Durant arrived, the underdog had won four of the last 10 series.

Golden State will need to rise to the occasion to avoid being another casualty. Leonard and the Raptors are no walkovers.