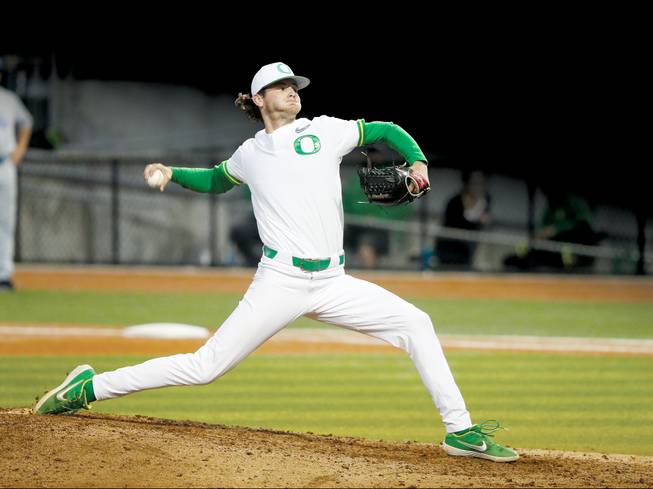 Ryne Nelson, a Basic Academy graduate, struck out 104 batters in 65 innings this year for Oregon.

Ryne Nelson swears he’s not thinking about Monday, June 3. No one would blame him if he was because it’s a day every baseball player dreams about yet few actually get to experience.

The University of Oregon right-handed relief pitcher and Basic Academy graduate looks like one of the lucky ones. He could be a first-round pick in the 2019 Major League Baseball Draft, leading a handful of Las Vegas locals expected to be selected early this year.

“I’d rather finish strong and not have any regrets about how I ended my college career, if this is my last year,” Nelson says. “I want to put all my focus into this, and I feel like the draft stuff kind of just happens.”

Nelson’s baseball career has shown a tendency to work itself out in unforeseen ways. College players with first-round grades like Nelson have often already been taken in the draft, as teams typically take high school players and dangle signing bonuses in front of them to incentivize turning professional. But Nelson got passed over by every team, going undrafted out of Basic three years ago. His high school statistics make his previous undrafted status all the more puzzling.

Through 51 1/3 innings in his senior year, Nelson struck out 57 batters with a 1.91 ERA and posted a .415 batting average to help Basic win the state championship. Then in the summer, he helped the Wolves claim the American Legion national championship.

Nelson headed to Oregon and continued to hit and pitch his first two years, but the results were divergent. While Nelson struggled at the plate during his sophomore year, batting .171, he dazzled on the mound with 37 strikeouts in 23 1/3 innings to earn second-team preseason All-America honors going into this year.

The Ducks then made him a full-time pitcher, which further elevated his draft stock. Nelson leads the Pac-12 Conference—and ranks fourth in the country—with a rate of 14.4 strikeouts per nine innings. He has a 4.29 ERA working mostly out of the bullpen with a .239 batting average against.

He estimates that he has added four miles per hour to his fastball since his Basic High days. “I’ve learned how to pitch at a higher level,” Nelson says. “Facing better competition has made me better.”

The Valley’s high school class of 2016 should make a mark on the early part of the draft. In addition to Nelson, UNLV shortstop Bryson Stott is almost unanimously slotted to go in the first round, with many mock drafts placing him in the top 10.

Stott, a Desert Oasis graduate, also went undrafted out of high school before generating preseason hype with a spot on All-America lists this year. He responded with a season in which he hit for a .356 average with a 1.085 OPS with 10 home runs and 16 stolen bases.

Rounding out the Las Vegas native triumvirate is Nick Quintana, who graduated from Arbor View and won the Las Vegas Sun’s Male Athlete of the Year award before heading to the University of Arizona. Like Nelson and Stott, Quintana was a preseason All-American. Unlike them, he has been drafted before: The Red Sox selected Quintana in the 11th round three years ago but he instead chose to attend Arizona.

Las Vegas hasn’t produced a first-round pick since Bishop Gorman’s Joey Gallo went to the Texas Rangers in 2012. In addition to Quintana in 2016, Faith Lutheran pitcher Zack Trageton went in the sixth round and Bishop Gorman infielder Beau Campana was taken in the 21st round.

But Nelson, Stott and Quintana could change that at the 2019 MLB Draft—and propel the local baseball class of 2016 to legendary status.

This story originally appeared in the Las Vegas Weekly.