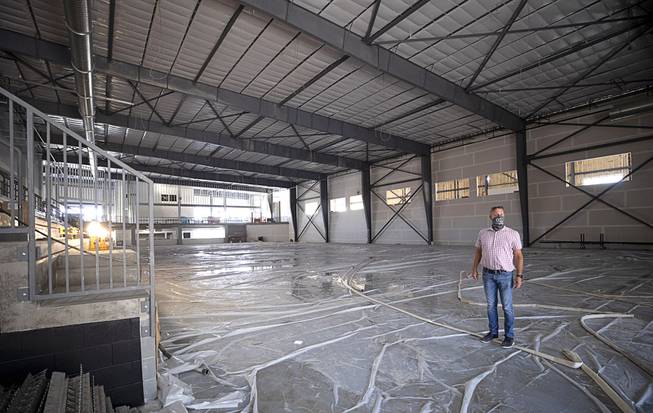 Henderson Silver Knights’ arena will have a familiar feel

Darren Gillett, managing member of Gillett Construction, stands in one of two ice rinks during a tour of the Lifeguard Arena, future practice facility of the Silver Knights hockey team, in downtown Henderson Friday, June 26, 2020. Gillett Construction is the general contractor on the project.

You’ll be forgiven if when you walk into the Henderson Silver Knights’ practice facility for the first time, you think you’re at another hockey rink across town.

After all, Lifeguard Arena in Henderson does bear a resemblance to City National Arena, the headquarters and practice rink of the Golden Knights. It’s not a carbon-copy, though, as the new building has its own character.

The Golden Knights and Silver Knights opened Lifeguard Arena in Henderson to the media for a tour Friday, showing the bones of what will be one of the most state-of-the-art facilities in the American Hockey League.

Much like City National Arena, Lifeguard Arena has two sheets of ice, a restaurant overlooking them both, a locker room, weight room and lounge for the anchor tenants, office and meeting space, and plenty of lockers and space for open skates.

Unlike City National, Lifeguard will host the home team on the left sheet of ice as seen walking through the main entrance. Its version of MacKenzie River Pizza will be stationed at the front of the building as opposed to the back, with less view of the ice but an outdoor balcony overlooking Water Street in downtown Henderson.

The Silver Knights will set up shop and practice there when it opens in the fall. They will play at Orleans Arena for two seasons beginning in 2020-21, then move into Henderson Event Center upon the building’s completion.