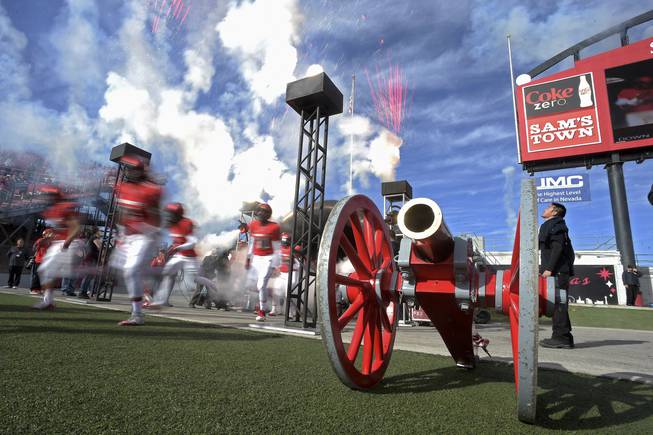 Like most of the sports world, it seems like UNLV fans are worried about fall sports. The COVID-19 outbreak has thrown things into turmoil, and the readers of this mailbag want to know if football is going to happen this year and what it might look like.

Talk about athletic department options on having fans, social distancing for UNLV football and basketball.

I’m sure fans are probably tired of hearing this (I am, too), but it’s just too soon to know what’s going to happen with fall sports. As coronavirus cases surge again, there are still a bunch of different ways this could go.

If I had to make an educated guess, though, I’d say the option that athletic departments are clinging to is the possibility of live attendance, even if it’s in a diminished capacity. It seems pretty impossible that there will be full stadiums as early as August, when college football season is set to begin, but is there a way to stage a game with 50 percent attendance? Will that leave enough room for social distancing? What about 30 percent?

Those ticket sales would at least help mitigate the cost somewhat for athletic departments. Unlike a league like the NFL, which derives a huge portion of its revenue from its television broadcast deal, colleges are more reliant on ticket sales and other in-person revenue streams. That means they’ll explore every avenue to have fans in the stands in 2020, and they’ll take it right down to the wire before making a decision if that’s what they have to do.

Long answer short, I wouldn’t expect a concrete plan on this until mid-August.

Talk about the odds of UNLV playing all their games at Allegiant Stadium this season or will there even be a season.

Sticking to the subject of the uncertainty of the upcoming college sports season, the one thing we know for sure about UNLV football is that the Rebels will not be playing all their games at Allegiant Stadium. The Sept. 5 game against Louisiana Tech has already been moved to Sam Boyd Stadium, and the Sept. 12 game against Arizona State was only allowed to stay at Allegiant when UNLV kissed the ring of the Raiders by agreeing to move it up one day.

As to whether there will be a season, I think there will be, just because the fate of college athletics may depend on it. Football generates so much revenue that most athletic departments won’t be able to fund their other sports unless that football money keeps coming in. For that reason, college presidents, athletic directors, league commissioners and network executives will literally move heaven and earth to have a season.

If football is canceled, it will be because the alternative is an apocalyptic.

Any word if Adam Plant or Justin Rogers are going to get immediate eligibility?

Nope. The players themselves haven’t been made available to comment and football coach Marcus Arroyo isn’t going to address their eligibility until the NCAA makes its decision — and the NCAA is probably working on more pressing issues at the moment.

The decision on Rogers’ eligibility will be of particular importance to UNLV’s fortunes. If the team is going to qualify for a bowl game in 2020, the Rebels will need a significant upgrade at the quarterback position, and Rogers could potentially provide that.

I’m appalled to have to be asking this question myself. Usually when I put out the call for mailbag questions, multiple readers respond by demanding a starting lineup projection for UNLV basketball. But since you guys dropped the ball this time, I’ll step up and get it done.

I’ve spent a lot of time during the offseason researching the Rebels’ incoming players, and here’s how I’d project the lineup as of now:

The power forward position is going to be interesting. Sophomore Moses Wood possesses a beautiful shooting stroke, but Del Cadia is a capable long-distance shooter himself, and Del Cadia is a little sturdier on the defensive end. I think Del Cadia has enough offensive skill to play next to Diong without crowding the paint or otherwise messing up the spacing.