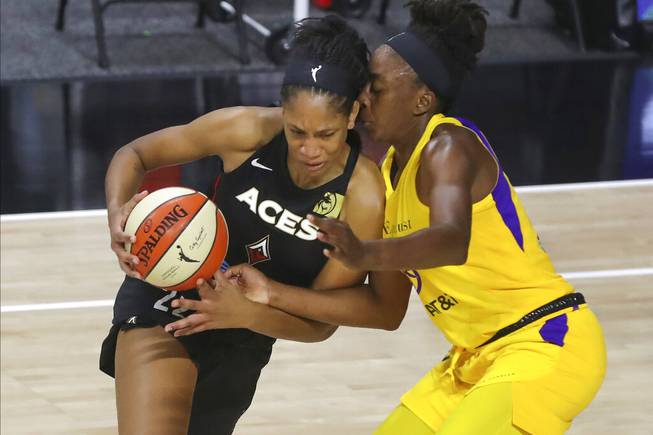 A’ja Wilson has been the cornerstone of the Las Vegas franchise since she was drafted and took her game to another level this season, earning her The Associated Press WNBA player of the year honors.

The former No. 1 overall pick three years ago led the Aces to an 18-4 record during the shortened season and the top seed in the WNBA playoffs that begin Tuesday in Bradenton, Florida.

“She knows who she is, she knows where she’s going,” said Las Vegas coach Bill Laimbeer. “She knows that she’s in charge, and she’s responsible for our team. She has taken this upon her shoulders.”

Wilson averaged 20.5 points, 8.5 rebounds and two blocks this year for the Aces and views herself as a more all-around player now.

“I feel like I’m a more complete player now then when I first got into the league,” Wilson said in an online interview. “Even when I may not be shooting the ball well, I can find other ways to help my team win.”

The 6-foot-4 Wilson, who turned 24 last month, was selected by the 16-member media panel that votes on the weekly AP power poll. She received 11 votes. Seattle’s Breanna Stewart was second with four. It’s the fifth season that the AP panel has selected postseason award winners.

Candace Parker edged Alyssa Thomas and Alysha Clark for defensive player of the year honors. Parker, in her 13th season, received five votes. Thomas and Clark each had four.

“When I made my decision to come to IMG this season, my focus was on working hard everyday to help put our team in a position to win a championship. For us, that starts with defending at a high level and closing defensive possessions with a rebound,” Parker said. “Overall, our team has been able to do that and I’m honored to be recognized for my role on that end of the floor. The award is a testament to my teammates executing on defense and our entire coaching staff.”

Minnesota’s Crystal Dangerfield was the runaway winner for rookie of the year. The second-round draft pick became the second consecutive Lynx player to win the award, joining Napheesa Collier. The Lynx’s point guard averaged 16.2 points and 3.6 assists this season.

She particularly excelled in the fourth quarter. Dangerfield had the second most total points in the league in the final period behind only Arike Ogunbwale. The UConn grad averaged 6.5 points a game in the fourth.

Other award winners include Las Vegas’ Dearica Hamby, who repeated as the sixth woman of the year; Stewart as comeback player of the year and Atlanta’s Betnijah Laney as most improved player.

Wilson also headlined the AP All-WNBA team. She was a unanimous choice along with Stewart. The were joined on the first team by Parker, Courtney Vandersloot of Chicago and Arike Ogunbowale of Dallas. The second team included Phoenix teammates Diana Taurasi and Skylar Diggins-Smith, Connecticut teammates DeWanna Bonner and Alyssa Thomas, and Minnesota’s Napheesa Collier.

Dangerfield was joined on the all-rookie team by Satou Sabally of Dallas, Chennedy Carter of Atlanta, Julie Allemand of Indiana and Jazmine Jones of New York.

The WNBA’s awards will be released over the course of the playoffs.

The Las Vegas Aces finished atop the AP Power Poll, a spot they held for three of the final four weeks of the season. Seattle was second. The Storm were followed by Los Angeles, Minnesota and Phoenix. Connecticut, Chicago, Washington, Dallas, Atlanta, Indiana and New York.

PLAYER OF THE WEEK