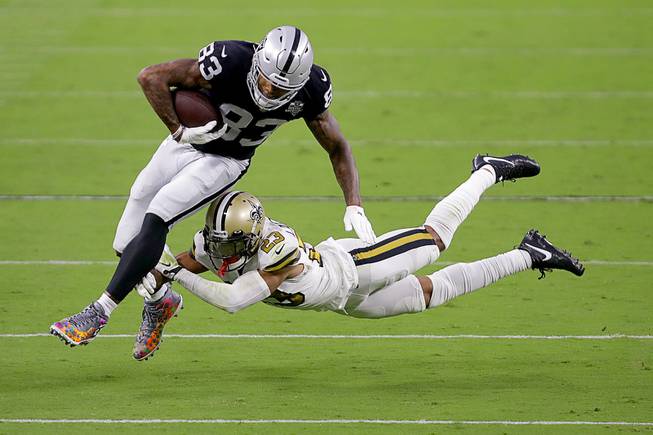 The Raiders strive to run a balanced offense, but in the team’s first game at Allegiant Stadium the field was tilted decidedly in Darren Waller’s direction.

Quarterback Derek Carr spread the ball around to 12 different receivers in Las Vegas’ 34-24 win over the New Orleans Saints on Monday night, and more often than not he found the open man. That just happened to be Waller most of the time, as the tight end was targeted a career-high 16 times and finished with 12 catches for 103 yards and a touchdown.

No other Raiders receiver was targeted more than three times, but you couldn’t blame Carr for leaning on the 6-foot-6, 255-pounder because every time Las Vegas needed a big play, Waller made himself available.

On Las Vegas’ first scoring drive — which came when the team was reeling and down 10-0 in the first quarter — the Raiders lined up for a crucial 3rd-and-1 at the New Orleans 42. Carr hit Waller for a 9-yard gain to keep the chains moving, and six plays later Carr found Alec Ingold for a much-needed 3-yard TD to put the Raiders on the board.

It wasn’t a particularly explosive performance by Waller; his longest catch went for 18 yards, and Bryan Edwards, Foster Moreau and Nelson Agholor all had longer gains. But none were more reliable than Waller.

That’s not something Waller takes for granted. He talks openly about the substance-abuse issues that nearly derailed his career before he straightened himself out and caught on with the Raiders, and now he takes pride in being someone his quarterback and the rest of the team can count on, whether it’s on or off the field.

After his big Monday night performance, Waller said he and Carr have been developing that trust for two years now.

“It started right when I first came to the team in 2018,” Waller said. “Just in Bible-study environments, just me being open about things I was going through and him just welcoming me and not judging me in any way, and from there it was a thing where I didn’t want to let him down and I wanted to be there for him.”

Las Vegas came out of the locker room at halftime tied 17-17, and Carr marched the team down the field before sputtering at the goal line. Faced with a crucial 4th-and-goal from the 1, coach Jon Gruden decided to go for it — and he decided to call Waller’s number.

The Raiders lined up in a tight formation and ran play action, with Waller feigning a block before leaking out into the end zone, wide open. Carr delivered an easy pass to his favorite receiver to give Las Vegas its first lead of the night, 24-17.

Carr’s affinity for Waller was evident in his post-game press conference.

“I think you know how much I love him,” Carr said. “I think he did an exceptional job.”