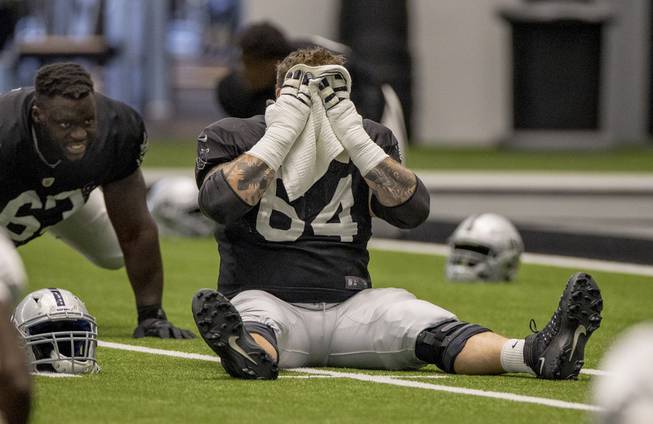 When Trent Brown limped off the field and toward the training table after the Raiders’ first offensive drive of the season, fear set in that one of the team’s biggest strengths coming into the year was unraveling.

Alarm turned to panic for some fans when, over the next five quarters stretching into Las Vegas’ Monday Night Football win over New Orleans, two more offensive linemen went down to join the right tackle Brown on the sideline. But the Raiders found a way to persevere and start 2-0 anyway, even with their depth up front wiped out.

“I believe they’re the best group in the world and I love them,” quarterback Derek Carr said of his offensive line last week. “And that’s not just the starters, all of them.”

Reserves Denzelle Good and John Simpson are the unsung heroes of Las Vegas’ season so far.

Pressed into action at tackle in place of Brown and fellow Week 1 injury casualty Sam Young, not the guard’s usual position, Good excelled for the second straight week in the victory over the Saints. Simpson, meanwhile, made his NFL debut after guard Richie Incognito’s recurring Achilles soreness flared up early in Monday night’s game and mostly held his own.

Simpson’s performance came as a pleasant surprise for Las Vegas as the fourth-round pick out of Clemson looked green throughout training camp and was inactive for Week 1 in Carolina. Carr, who was sacked three times in the first half against the Saints, admitted it took a while for the makeshift line to adjust on Monday night, but once it did, the unit was key to the offense piling up 375 yards with a lopsided 36:18 time of possession.

“We had a double move early where I couldn’t step into it,” Carr said. “Besides that, they were solid, and against (the Saints’) front, that’s not easy to do. There’s a little bit of chess to that when you are trying to figure things out.”

The past week may have felt more like basic combat training than chess for Simpson. With Incognito limited in practice throughout the week, Simpson took many of the first-team left guard reps with coach Jon Gruden and offensive line coach Tom Cable not accepting any decrease in quality from the veteran to the rookie.

They were demanding, and by the way Gruden describes it, borderline harsh, on Simpson throughout practice.

“I can’t say I’ve been harder on any other rookie in the last couple years than John Simpson,” Gruden said, “because we drafted him with the expectation that he’d come in here and be a player for us.”

Simpson had a particularly rough practice last Wednesday with veteran defensive lineman and practice-squad player Datone Jones pushing him around. But Simpson learned from his one-on-one losses to Jones, according to Gruden, and was better for it against the Saints.

Simpson has appreciated the coaching staff challenging him, and said he thanked Gruden because he needed to be pushed “the extra mile.”

“It’s been really easy for me going through college and even high school,” Simpson said. “Everything was just easy, and now on the NFL level, everybody’s great so he’s definitely been hard on me.”

Gruden complimented Simpson’s performance against the Saints as a “good start” but said he still had a long way to go and credited some of the success to playing alongside center Rodney Hudson, right guard Gabe Jackson and left tackle Kolton Miller.

That trio makes for the only players other than Carr to be on the field for all of the Raiders’ 143 offensive snaps so far this season. It’s unclear who, if any, of the Brown, Incognito and Young group will return for Sunday’s Week 3 game at New England.

It seems much more certain that the Raiders won’t list both Simpson and tackle Brandon Parker, who only logged six special teams snaps against the Saints, as inactive again like they did against the Panthers. With the injuries, they’re likely to need both of them whether it’s for a fill-in start or depth.

The Patriots aren’t planning for a drop-off no matter who’s in the lineup.

“Jon does a great job of adapting to his personnel and utilizing the weapons he has,” New England coach Bill Belichick said. “He does as good a job as anybody … He’s a very creative guy, a very creative coach. He does an excellent job of game planning and strategizing. They’re also a very fundamental team that executes well.”

Carr admitted that Las Vegas briefly changed its offense to focus more on quick-read passes against New Orleans to give Simpson in particular time to get acclimated. Once Simpson proved he was up to the task, however, the Raiders opened the playbook back up.

The Raiders’ offensive line has graded out as slightly below average through two games of the season, according to advanced statistics sites like Football Outsiders and Pro Football Focus, but that’s not all that bad considering all their injuries. And it’s also a ranking that their teammates would argue against.

They’ve expressed and instilled the utmost confidence in whomever lines up on the ball.

“Really my biggest thing is just quieting my mind, talking to myself and letting myself know I can do it,” Simpson said.

Hating the Patriots: Why it’s your duty as a Las Vegas Raiders fan