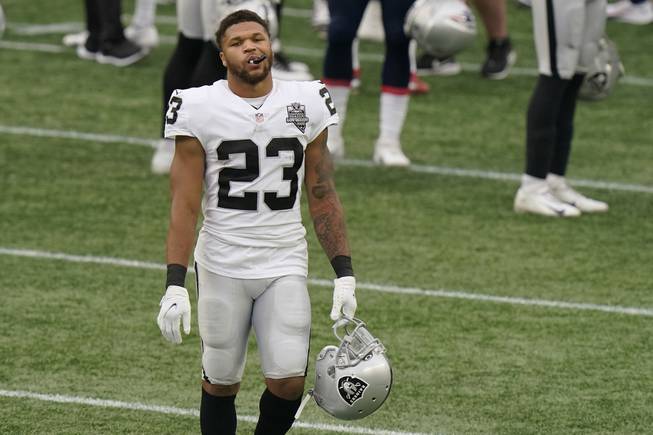 Coming into the season, the Las Vegas Raiders looked like one of the only teams in the NFL planning to employ a running back who would single-handedly dominate the team’s share of rushing attempts.

That may no longer be the case as the Raiders return from their bye week on Sunday Night Football against the Tampa Bay Buccaneers. Second-year standout Josh Jacobs will continue to be their featured back, but veteran Devontae Booker is going to get plenty of carries too.

Jacobs sits second in the NFL, behind Tennessee’s Derrick Henry, with 21 carries per game. The workload, or perhaps opposing teams scheming more specifically for him after a breakout rookie season, has cut into the Alabama graduate’s efficiency as he’s averaging 3.6 yards per carry — 1.2 less than last season.

The increased scrutiny has apparently been to Booker’s benefit as the former Utah star is averaging 7.1 yards per carry with three of the Raiders’ four longest rush attempts of the season (Jalen Richard, not Jacobs, has the other). That includes a 43-yard gain in Week 5’s win at Kansas City that kickstarted Las Vegas’ comeback after it fell into a 21-10 second quarter hole.

“Jacobs is the headline here,” Gruden said after the victory. “But Devontae Booker came in and made big plays for us.”

No one, except presumably Booker, saw this coming. After spending four years with the rival Denver Broncos, Booker signed with the Raiders on a one-year, veteran-minimum deal in May — a month and a half after the start of free agency.

Booker looked like a long shot to make the season-opening roster considering the move came a week after the NFL Draft where the Raiders had addressed their running back depth by taking Lynn Bowden in the third round. But Booker outperformed Bowden in training camp to an extent Gruden and his staff couldn’t ignore.

He became one of the only surprise members of the 53-man roster with the Raiders trading Bowden to the Miami Dolphins for a sixth-round pick to make space.

“It says a lot about my work ethic and just me coming here competing the whole month of training camp and just working my tail off,” Booker said after making the team, which came with an $87,500 roster bonus.

Still, many assumed his primary role would be on special teams. Booker had other plans, reporting that he was immersed in Gruden’s notoriously intricate playbook and preoccupied with getting his mindset right.

The 28-year-old had fallen out of favor in Denver, seeing his carries decline each season, and he was determined to make the most of a second chance in a new city.

“When it’s time to be out there on the field, I’m just going to take advantage of my opportunities and go out there and make plays,” Booker said. “That’s why I’m here, to be a playmaker.”

He excelled on four carries while giving Jacobs a break in a season-opening win over Carolina, and combined with his practice prowess, Gruden had seen enough. He started plotting with running backs coach Kirby Wilson on how to get Booker more playing time over the next few weeks.

“I had the conversation with Booker and I told him, ‘Hey, I’ve got to do a better job based on what Coach Gruden and I talked about getting you more involved in the offense,’” Wilson said last week. “We think we’re on a really good pace right now to do that moving forward. It just took a little while to figure it out as the position coach.”

Their running styles also mirror each other as they excel at breaking through arm tackles and making quick cuts up field.

Raiders’ fans, therefore, may need to keep their eyes peeled for the rest of the season. It might be hard to tell who’s in on any given snap.

“(Booker) just had a couple lean years the last couple in Denver where he didn’t get the opportunities,” Wilson said. “We knew it was a work in progress and once we got him up to speed with our offense and the way we do things here that he would have an impact. I think as the season progresses more and more his talent and abilities will flourish behind what we think is one of the best offensive lines in football.”