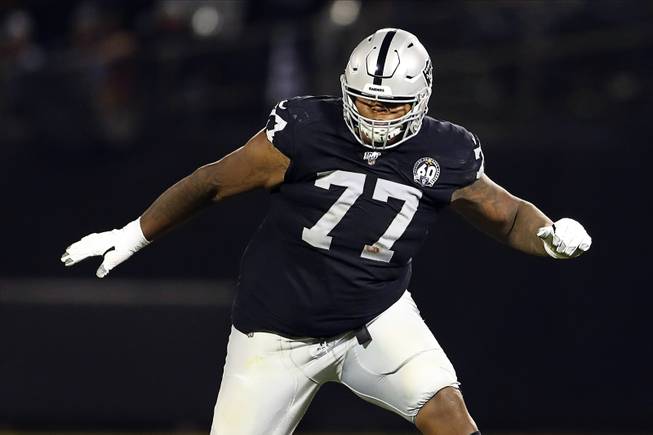 In this Sept. 9, 2019, file photo, Oakland Raiders offensive tackle Trent Brown protects a gap in the offensive line during an NFL football game against the Denver Broncos, in Oakland, Calif.

Raiders coach Jon Gruden has a lot on his plate this week. Not only does he have to scheme against his longtime personal nemesis, Tom Brady, for their Sunday Night showdown, he also has to figure out a way to move the ball against a Tampa Bay defense that rates as perhaps the toughest in the league.

And Gruden may have to reshuffle the entire offensive line in the process.

Las Vegas sent its starting offensive line home before Wednesday’s practice after right tackle Trent Brown tested positive for COVID-19. Gruden said the move was made after contact tracing showed the blockers had been in close proximity to Brown; as of Wednesday afternoon, only Brown had returned a positive test.

The offensive line has been a strength for the Raiders in 2020, with left tackle Kolton Miller, center Rodney Hudson and right guard Gabe Jackson turning in standout performances. Denzelle Good, who has been elevated to the starting unit in place of injured left guard Richie Incognito, has also been solid. All four were unavailable Wednesday as they entered a four-day quarantine due to their proximity to Brown.

Gruden, who contracted COVID-19 over the summer, said his first concern was for Brown’s health.

Gruden expressed optimism that some or all of his blockers (aside from Brown) could be cleared to play against Tampa Bay on Sunday, but if not, it would leave the Raiders in a very vulnerable position up front.

Tampa Bay currently ranks second in the league in sack rate, as the Buccaneers take down opposing quarterbacks on 9.32% of dropbacks. That ferocious pass rush was on display last week, when Tampa hosted Green Bay and the nearly un-sackable Aaron Rodgers; though opponents had only sacked Rodgers twice in the first four games, the Buccaneers dropped him five times in a 38-10 victory.

Las Vegas has done a superb job of protecting Derek Carr this season, as he has been sacked on just 4.37% of pass plays. That ranks the Raiders ninth in the league, and all those clean pockets have translated into sterling numbers for Carr (73.1% completions, 1,442 yards, 11 touchdowns, one interception). And the good news for the Raiders is that some of that production has come behind second- and third-string linemen.

Because Brown and Incognito were sidelined for much of the first five games, reserves John Simpson and Sam Young have each logged starter’s snaps at different points this season, so the Raiders probably have enough depth to withstand one or two absences this week against Tampa Bay.

Carr said he would still have confidence in the pocket regardless of who is protecting him on Sunday night.

Gruden said the Raiders got through practice shorthanded on Wednesday, and if pressed by COVID circumstances, they’ll get through Sunday’s game as well.

“We used other linemen, obviously, and we adjusted practice,” Gruden said. “We still got a lot of work done, but you have to have linemen to play. We’ll have five on Sunday. We’ll be ready to go.”