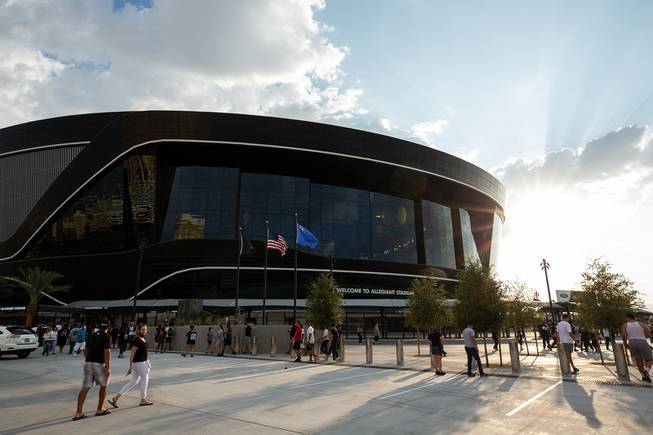 UNLV football fans will get to open Allegiant Stadium, after all.

The school announced Friday that it has received government approval to allow limited attendance for its first two scheduled home games, which will mark the first time fans are allowed inside the new $2 billion venue.

Two-thousand spectators will be allowed, or 3% capacity in the 65,000-seat stadium. UNLV had initially asked for 10% capacity, but the Southern Nevada Health District determined the number of fans had to be lowered in order to allow for proper spacing.

Fans will be required to wear masks, maintain social distance and stay within their assigned seating “zone” during the game. No more than 250 people will be allowed in each zone, and the zones will be separated by 25 feet.

UNLV will host UNR on Oct. 31 and Fresno State on Nov. 7. Attendance plans for the remaining two home games after that (Nov. 27 vs. Wyoming, Dec. 4 vs. Boise State) are yet to be determined.

UNLV was originally scheduled to host the first sporting event at Allegiant Stadium, but the COVID-19 pandemic forced the cancelation of its Aug. 29 date against Cal. That paved the way for the Las Vegas Raiders to break in the stadium with a 34-24 win over the New Orleans Saints on Sept. 21.

The Raiders are not allowing fans this season, however, so UNLV’s home game against in-state rival UNR will mark the stadium’s first event with spectators. Single-game tickets will be available first to season-ticket holders who belong to the Rebel Athletic Fund. Tickets start at $110 for fans who want to watch UNLV defend the Fremont Cannon against UNR on Nevada Day.