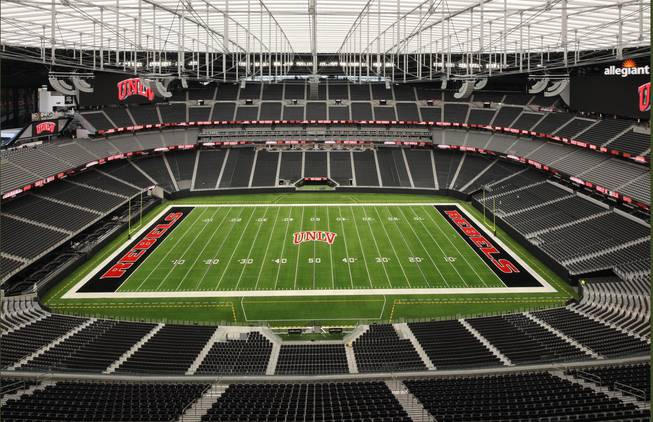 The 2020 season promises to be a wild one for UNLV football. In fact, for a while there wasn’t even going to be a season, as the Mountain West canceled its campaign in August, only to reverse course a few weeks later and announce a truncated, eight-game schedule despite the ongoing COVID-19 pandemic.

Even with all that uncertainty looming over the proceedings, here are 40 predictions that are guaranteed to come true in Marcus Arroyo’s first season at the helm:

1. How many games will UNLV play? This is really the only question that matters this season, and the answer is seven. The Mountain West’s league-only schedule is designed for each team to play eight games, resulting in 48 games total; in order for the MWC’s broadcast contract to be fulfilled, Fox and CBS need 39 games to televise. That allows the conference to cancel one game a week and still get paid. UNLV isn’t releasing its COVID-19 testing data this season, but based on literally everything else that is going on in the world right now, there are bound to be some outbreaks in a non-bubble environment. UNLV is taking some precautions, but it’s basically business as usual in regards to COVID. At some point, UNLV (and just about every other MWC team) will have a game canceled; but the Mountain West can’t afford more than that.

2. Will any fans be allowed to watch this year? Yes. This question has already been answered, as UNLV announced it will allow 2,000 fans per game at Allegiant Stadium.

3. Which quarterback will start on Saturday at San Diego State? Kenyon Oblad

4. Which quarterback will start the most games? Kenyon Oblad. Head coach Marcus Arroyo has been coy about his quarterback situation throughout training camp, but it’s Oblad’s job to lose. He finished last year as the starter, and while his season-long numbers aren’t overly impressive, he got better as the games went on and finished with a bang, hitting 72.7 percent of his passes and throwing for 229 yards and three touchdowns in a win at UNR. TCU transfer Justin Rogers has an intriguing skill set, but he hasn’t played competitive football since 2017; Arroyo has said several times that he values experience, so look for Oblad to stick as the No. 1 QB in 2020.

5. Which quarterback will lead the team in passing yards? Kenyon Oblad

6. How many yards will Charles Williams run for? 910. Arroyo has built his reputation with the passing game, but this UNLV team is built to run the ball, and Arroyo is a good enough coach to take advantage of that. Williams proved last year he could handle a full workload (212 carries, 1,257 yards, 11 touchdowns), so an eight-game schedule should be a breeze for him. Look for Arroyo to lean on his stud running back every week.

7. What will be Charles Williams’ highest single-game rushing total? 182, vs. UNR

8. What will be Charles Williams’ longest rush? 71 yards vs. San Jose State

9. Will Williams lead the Mountain West in rushing? No

10. Will this be Tyleek Collins’ breakout season? Collins flashed big-time potential as a freshman, but the speedy receiver took a step backward last season, posting just 15 catches and 79 receiving yards in an injury-plagued campaign. But there has to be a spot for him in Arroyo’s offense, and that seemed to be confirmed by the Week 1 depth chart, which lists Collins as one of three starting wideouts. If he can produce something in the way of 25-30 catches and four touchdowns — with a handful of explosive plays included — that would be an excellent year for the junior.

11. Will Marcus Arroyo best Tony Sanchez’s winning percentage from last year? Yes, and he’d better. Sanchez went 4-8 last season (.333 winning percentage) and that performance got him fired; Arroyo would have to go 2-6 to post a worse percentage, and it’s safe to say if that happens, it will be a massive disappointment.

12. Who will account for more touchdowns (passing and rushing), Armani Rogers at Ohio University or UNLV’s No. 1 quarterback? Rogers. Even though Ohio is playing an even-shorter six-game MAC schedule, the former UNLV QB appears to have a strong hold on the starting job. Though I expect Kenyon Oblad to win out as UNLV’s top passer, he’ll still have to cede some snaps to Justin Rogers and maybe even freshman Doug Brumfield in certain situations. Last year, Ohio’s starting quarterback posted 33 touchdowns (20 passing, 13 rushing); if Rogers gets half of that in six games, I don’t see any single UNLV quarterback exceeding his production.

13. How many catches will Randal Grimes and Steve Jenkins combine for? 48

14. Will UNLV keep the Fremont Cannon? Yes. UNLV will defeat UNR for the third straight season and break in Allegiant Stadium with a 31-20 win on Oct. 31.

15. Will there be any brawls at the UNLV-UNR game? No. While there will be 2,000 fans in the stadium, tempers will not flare to the extent they did in UNLV’s walk-off overtime victory last year.

16. What will be UNLV’s best win? At San Jose State on Nov. 14. That victory will improve UNLV to a shocking 3-1 record through the first half of the schedule and serve as the high point of the 2020 season.

18. Can the UNLV defense allow fewer than 6.0 yards per play? Yes. Getting under 6.0 yards per play shouldn’t be that difficult, as only the very worst teams in the country field defenses that bad. And yet, UNLV has been worse than 6.0 in each of the last six seasons, ranking in the bottom 15 nationally in five of those six years. The last time UNLV came in under that threshold was, amazingly, 2013. Last year they allowed 6.4 yards per play, which ranked 113th. Arroyo is an offensive coach, but he should be able to cobble together a defense that is slightly better than the bottom of the barrel.

19. What will be UNLV’s highest scoring game? 38 points vs. Fresno State

22. What will be UNLV’s longest play from scrimmage? 75 yards on a pass from Kenyon Oblad to Steve Jenkins

23. Will there be an overtime contest? No

24. Who will be UNLV’s most impactful newcomer? Adam Plant. The 6-foot-6, 250-pound defensive end is a physical specimen, and he was a coveted recruit coming out of Bishop Gorman in 2018. He didn’t play much as a freshman last year at TCU, but the potential is there. He is listed as a starter for UNLV and will be expected to generate some pressure on opposing quarterbacks. It shouldn’t be too much to expect four or five sacks from Plant in eight games.

26. How many 100-yard rushing games will Charles Williams record? Five

27. How many players will UNLV place on the All-Mountain West first team? One, Charles Williams

28. How many games will UNLV win at Allegiant Stadium? Three

29. Will UNLV quarterbacks complete more than 60 percent of their passes? Yes. As college football has advanced at warp speed, with spread offenses and efficient passing games becoming the norm, UNLV has been left miles behind. UNLV has completed less than 55 percent of its passes in each of the last six years, which is, frankly, a stunning level of offensive incompetence. If Arroyo accomplishes nothing else at UNLV, his hire will be worth it if he can drag the program’s passing playbook into the modern era.

30. Will tight end Gio Fauolo score a touchdown this season? No. Fauolo was UNLV’s top tight end in 2019, but he is suspended for the first two games of this season for swinging his helmet at fans during the brawl after the overtime win in Reno last year. That leaves Fauolo just six games to get into the end zone, and with an uncertain quarterback situation, that’s no guarantee.

31. Who will be the team’s most valuable defensive player? Kolo Usaike. The defense lost all of its playmakers to graduation, and what’s left is not impressive on paper. Heralded linebacker Vic Viramontes was a bust last year, linebacker Ferrell Hester is not on the depth chart at all, and while defensive end Adam Plant has been talked up by Arroyo. There are holes across the secondary. That leaves Usaike as the anchor. The 6-foot, 310-pounder won’t amass big numbers as an interior defensive lineman, but he is at least capable of holding up at the point of attack. If he can sprinkle in a handful of plays behind the line of scrimmage, he could end up as UNLV’s best defender.

32. Will UNLV return a punt for a touchdown? No, as is tradition.