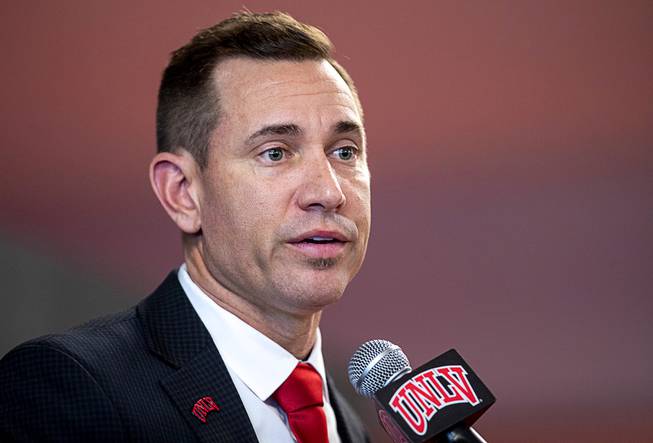 New UNLV football head coach Marcus Arroyo responds to a question from a reporter during an introductory news conference at the Fertitta Football Complex at UNLV Friday, Dec. 13, 2019.

We are going to find out a lot about Marcus Arroyo over the next two months, and it begins today when UNLV travels to Carson, Calif., to take on San Diego State.

The UNLV football program has been shrouded in mystery since the end of last season, with the quarterback situation, the defensive system and Arroyo’s coaching philosophy all counting as gigantic question marks. Now we’ll get to see how Arroyo, in his first stint as a head coach, wants to build his team.

A starting QB won’t be named until just before kickoff, but that question will be settled fairly early. The rest will be an ongoing process as Arroyo learns on the job and tries to build momentum for a program that went 4-8 last season.

Some keys to watch today:

Arroyo wants to throw the ball, generally, but expect UNLV’s offense to revolve around senior running back Charles Williams this season. The All-Mountain West selection is coming off a 1,200-yard campaign and should be primed to carry an even bigger load in this truncated season.

Williams had his way against SDSU last year, as he ran for 113 yards on 19 carries against an Aztecs squad that ranked third in the nation in rush defense (2.8 yards per carry allowed), but it wasn’t enough — San Diego State escaped with a 20-17 victory. Rocky Long left San Diego State in the offseason, so there could be some slippage in the team’s run defense, but Brady Hoke will still make it tough to gain yards on the ground.

Can Williams put the team on his back and tilt the field in UNLV’s favor? That’s the kind of performance the scarlet and grey will need from him all season.

San Diego State’s offense cratered last year, so the new coaching staff has its work cut out. The Aztecs are building around sophomore quarterback Carson Baker and a stable of veteran receivers and tight ends who should challenge the UNLV defense down the field.

That could be an issue for UNLV, which appears to be going into the opener with a very thin secondary. True freshman Nohl Williams and redshirt freshman Sir Oliver Everett are the starting cornerbacks, and juniors Bryce Jackson and Tre Caine are the safeties. How cohesive can we really expect that inexperienced unit to be in Week 1?

UNLV has been extremely secretive about its COVID-19 testing, as the program has chosen to not even release its weekly data (other Mountain West teams are reporting total tests and positive results on a weekly basis). That means we’ll have to scour the depth chart each week in order to take a stab at potential corona-related absences.

The Week 1 depth chart provided a ton of opportunity for speculation. Receivers Randal Grimes, Mekhi Stevenson and Brandon Presley are all expected to play key roles this season, but they were left off the depth chart entirely; that could signal a COVID cluster among the position group, or it could be a case of Arroyo sending a message to some healthy veteran players about what he expects in practice. We won’t know until kickoff.

In the defensive backfield, senior safety Greg Francis and junior safety Drew Tejchman were also wiped from the initial depth chart; senior linebacker Farrell Hester was missing as well. Again, it could be COVID, it could be unrelated injuries or it could be Arroyo telling those players they’re not good enough to be second or even third string heading into this contest. It’s going to be a guessing game every week.