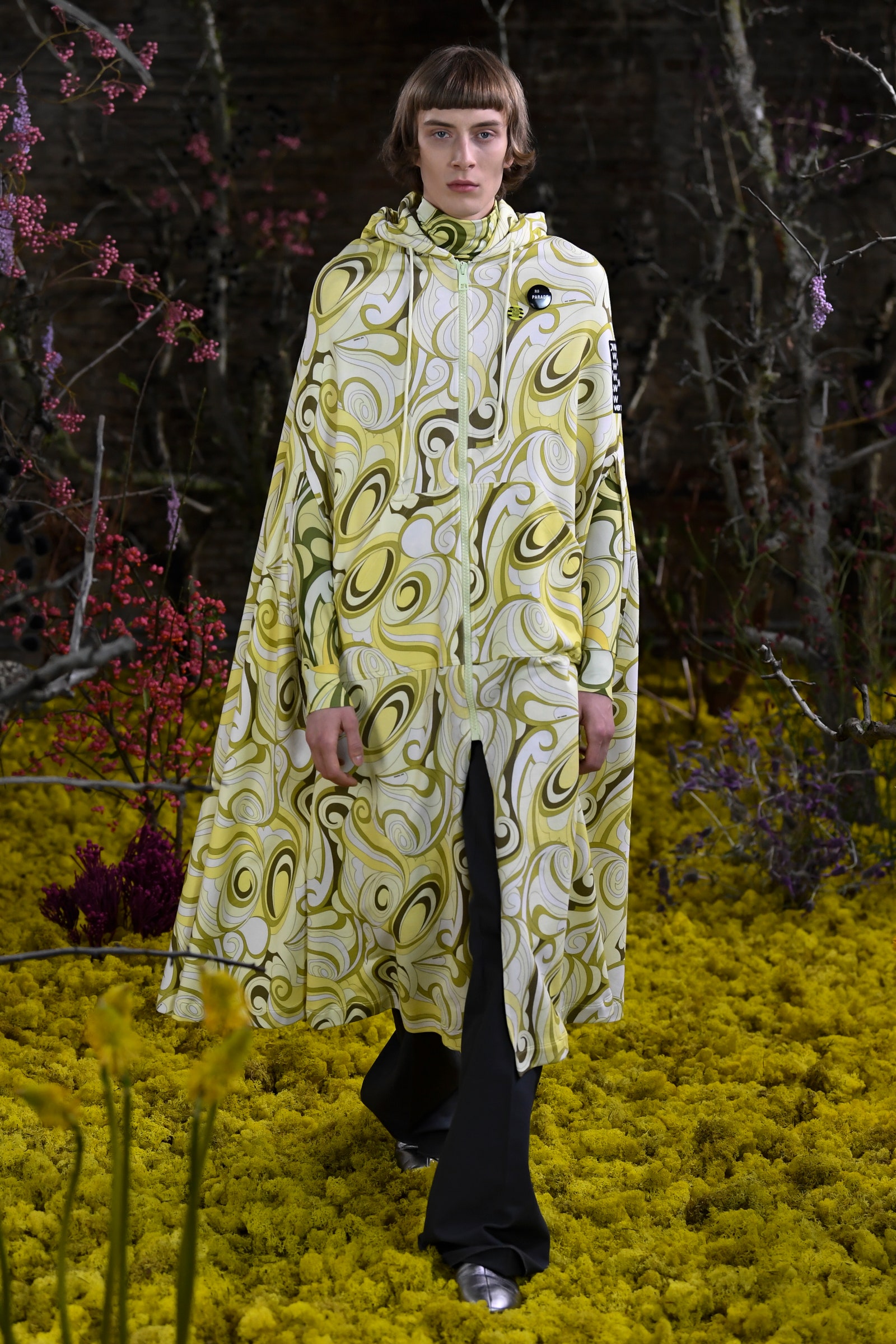 Raf Simons might be one of fashion’s best opinionators—tossing off commentary on the commercialization of fashion at the expense of creativity, and the new generation of designers who, like, Simons, take inspiration from the youth—but he is not actually a man of many words. After dropping a moody short film (his directorial debut!) to present his Spring 2021 collection, his team circulated a version of the typical show notes: instead of an essay about ideas or references, it was simply a list of films, from flower power canon cinema like Hair, Zabriskie Point, and Alice In Wonderland, to horror classics about endangered teens and domestic destruction like The People Under the Stairs, Picnic at Hanging Rock, A Nightmare on Elm Street, and Scream. At last! A fashion collection that asks, “DO YOU LIKE SCARY MOVIES?”

The video presentation was itself a scary movie: men and women—this collection featured Simons’s first stab at womenswear under his eponymous label—crawling out of a hole on their hands and knees and wading through a field of yellow stuff. Elsewhere, models draped themselves in huge mesh hammocks, like a spider’s web, and crowded around a window letting each other in, all in slo-mo. Finding refuge—and finding it slightly disturbing—seemed to be the mood.

The shapes in this collection were fantastic. The flower power theme led Simons to sensual silhouettes: long sleeveless coats over bellbottoms, bishop-sleeve blouses, and a number of long hoodie cloaks. His swirling graphic prints and clingy tattoo tops (the lowkey must-have fashion piece of the year) were spunky new territory. The clothes struck me as industrialized takes on the Romantic, fluid shapes of London designer Michael Fish, or Mr. Fish, whose psychedelic Renaissance garments were beloved by Mick Jagger and David Bowie. There were also a lot of the old Simons signatures: the plastic-wrap bodice; the appliqued photos by longtime Simons graphic collaborator Peter de Potter; and myriad references to youth culture, like turtlenecks that read, “Children of the Revolution” and buttons in a ’70s horror font beckoning you to “JOIN US.” As for the womenswear: many women are already wearing the brand. I suspect most Simons customers will pull from both sides of the rack, though it would be awesome to see a celebrity like Millie Bobby Brown or Laura Dern wear the black velvet gown with mylar buttons lining the scoop neck like a pearl necklace. Women in Hollywood just need to get weirder!