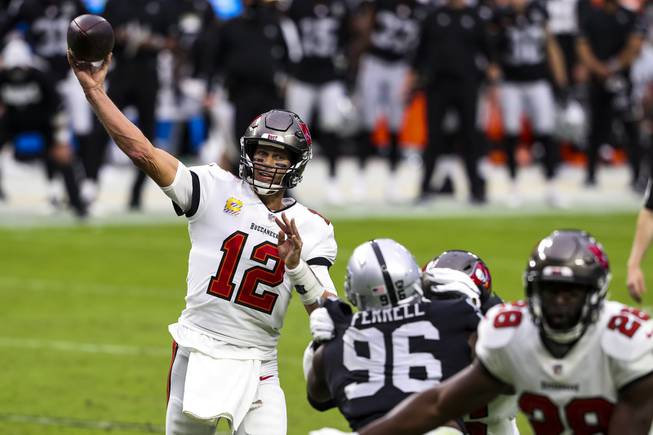 Maurice Hurst turned around and offered to help Tom Brady up after he slammed the veteran quarterback to the Allegiant Stadium grass early in Sunday’s game.

The Raiders’ defensive tackle appeared concerned about the Buccaneer legend’s wellbeing in a moment more fitting of celebration than caution. It would end up being Las Vegas’ only chance to celebrate getting to the six-time Super Bowl champion on Sunday afternoon, as it didn’t touch him a single time for the rest of the game.

The Raiders couldn’t get near either Brady or his passes in a 45-20 loss that dropped them to 3-3 on the season.

Brady had his best game since joining the Buccaneers with 369 passing yards and five total touchdowns — four passing, one rushing — at the expense of the Raiders, which looked more deferential of a long-time Raiders’ villain than determined to stop him. Brady wiped away all signs of progress the Las Vegas defense had shown recently.

There was hope brewing that a long-struggling Raiders’ stop unit was on the path to respectability after mounting pressure and coming up with big plays in key moments in a win at Kansas City its last time out. Even in their last loss, at home to the Buffalo Bills, the Raiders’ defense improved as the game went on to give the offense a chance at a comeback.

“It was two different styles of offenses to compare than to just say we did one thing more last week than we did this week,” Raiders linebacker Cory Littleton said. “It’s just a different game plan, different team and we didn’t get it done.”

The Raiders’ defense didn’t start terribly. Las Vegas forced punts on three of Tampa Bay’s opening seven drives — the problem was,  they gave up 24 combined points on the four others — and Gruden banked on it being able to do it one more time going into the fourth quarter.

Facing a fourth-and-1 from the Tampa Bay 17-yard line, Gruden sent in the field goal unit to cut Tampa Bay’s lead to 24-20 instead of keeping the offense on the field to try to tie the game. That ended up being a costly mistake, as Brady rallied for an 11-play, 67-yard touchdown drive to make it a two-touchdown game and mostly bury the Raiders. Included on that possession were a trio of third-down conversions that had Gruden grousing.

The first one was particularly upsetting to the coach as the Raiders had a chance to force a three-and-out on a 3rd-and-13 play before Brady dumped off a short pass to running back Leonard Fournette, who took off and dove for the first down.

“We had them right where we wanted them and they converted a checkdown,” Gruden said. “That’s frustrating.”

A blown coverage and holding penalty paved the way for Tampa Bay to get the next two third downs. Gruden couldn’t help but wonder if the game could have been different with starting defensive backs Johnathan Abram and Damon Arnette, both of whom were out with coronavirus-related issues.

Arnette tested positive during the bye week while Abram came into contact with right tackle Trent Brown, who tested positive on Tuesday, without enough time to fully go through the NFL’s quarantine protocols. Las Vegas caught a break in the other four players determined to come into contact with Brown — offensive linemen Rodney Hudson, Gabe Jackson, Denzelle Good and Kolton Miller — all being ruled eligible after five straight days of negative tests.

But they were rusty after not being able to participate in practice, as the Raiders’ running backs were held to an average 2 yards per carry. Unlike Brady, Carr was constantly under duress with the Buccaneers managing five quarterback hits to go with three sacks by linebacker Devin White.

“Football is a game that needs to be practiced,” Carr said. “When you don’t have guys out there for the week, it hurts.”

Carr praised his offensive line for doing the best it could despite continually adverse situations. Las Vegas lost Sam Young, Brown’s replacement, to an injury in the first half and Jackson to an ejection right after Carr found Darren Waller for a 2-yard touchdown to make the score 24-17 early in the second half.

Television replays didn’t show Jackson doing anything too aggressive in a post-score scuffle, but Gruden said the officials told him that the league headquarters in New York had access to other angles.

“The job we were able to do today against the No. 1 defense in the NFL with everyone missing practice until today and getting to play in the game, it’s impressive,” Carr said. “That’s just me being real, but was it good enough? No. This is a production-oriented business.”

Carr produced in a big way at the onset of the game to put the Raiders up 7-0, taking the offense down the field on only six plays before a 20-yard touchdown pass down the slot to Nelson Agholor, who was his favorite target all day. Agholor wound up with five catches for 107 yards — including a 44-yarder to set up the Waller score — but had his first pair of drops of the year in the fourth quarter, both of which were costly.

The first contributed to Gruden’s decision to kick the field goal as Agholor couldn’t grab a floater that hit right in the middle of both of his hands on second down of the drive. The second drop came on a pass that was a little high from Carr, but still sailed through Agholor’s hands and into the diving body of Buccaneers safety Antoine Winfield Jr.

That happened on the first play after the Buccaneers made it 31-20 on a Godwin touchdown reception, at the Raiders’ 25-yard line. Two plays later, Buccaneers running back Ronald Jones ran in a touchdown and the late-scoring rush to make the final score a rout was on.

“We practice great, now we have to correlate to playing great in these intense game time situations,” Littleton said. “Everyone is capable of it and we all plan to strive and do these things.”

Littleton insinuated that Brady’s stationary, pocket-passing style was harder on the Raiders than the mad scrambling of the Chiefs’ Patrick Mahomes, whom they were able to harass into mistakes. Gruden wrote off some of the defensive miscues as being a product of a “tough week,” but vowed to make changes regardless.

That puts the Raiders’ defense back in a familiar spot, exposed and left looking for answers.