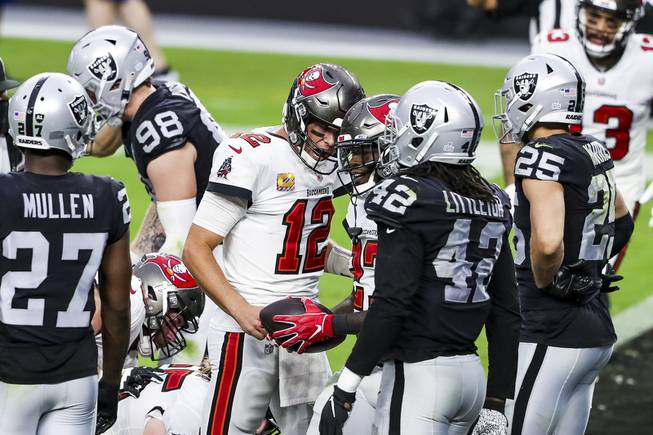 Tampa Bay quarterback Tom Brady (12) congratulates running back Ronald Jones after he scores a touchdown against the Raiders at Allegiant Stadium, Sunday, Oct. 25, 2020.

A fair bit of frustration followed each of the Raiders’ first two losses of the season. Despite Sunday’s 45-20 defeat to the Buccaneers nearly equaling the margins of the other two losses combined, the team was not nearly as negative.

Quarterback Derek Carr specifically strayed from any “enough is enough” lament or “let it get away” bemoaning and instead decided to take a more positive overall view of the Raiders’ .500 record through six games.

He’s not wrong as Las Vegas has only been favored in one game so far and by many measures has eclipsed expectations considering its quality of opposition. The Raiders have taken on teams with a combined .647 winning percentage — not including the games against the Raiders — to play a schedule the Football Outsiders’ DVOA ratings peg as one of the 10 toughest in the NFL.

It’s that context that the team is subtly emphasizing should be applied when assessing the Raiders heading into Sunday’s game on the road at the Cleveland Browns.

“We played some really good offenses,” coach Jon Gruden said. “Just so you know, Tom Brady is a problem for a lot of people. So is Drew Brees and certainly a lot of guys that we’ve seen are very good players. We’re going to stick together, bond together.”

The win percentage of the remaining teams the Raiders will face is a combined .442, giving Las Vegas one of the 10 easiest remaining schedules by DVOA. The forgivable road ahead should give the Raiders, currently only one game out of a playoff spot, a path to reaching its postseason aspirations.

The general feeling, both inside the Raiders organization and outside of it, is that they have the offense to be a part of the proverbial cream. Las Vegas ranks inside the NFL’s top 10 in gaining 6 yards per play.

Defense, where the Raiders rank 30th in the NFL at giving up 6.3 yards per play, is what may sink them. Gruden’s not just going to accept such a fate, however, as he’s promised player personnel and strategic changes going forward.

“We’re not the only defense in pro football that’s struggling at times,” Gruden said. “But we have the right stuff. We have enough talent. We’re going to make some changes and hopefully we have some better results.”

Coaching changes will not be a part of those switches, despite rumors of defensive coordinator Paul Guenther’s job security surfacing earlier this season. The entire staff met “very early in (Monday) morning” at the Raiders’ team headquarters in Henderson, according to Gruden, to plot how it could improve defensively.

The resulting plans of that session will be introduced to the roster Wednesday morning when the team commences preparation for the Browns. By all outwardly indications, the players will greet the new ideas enthusiastically.

The Raiders are not mired in doubt regarding their recent ups and downs. They’re a team convinced their best is yet to come, and considering what lies ahead, they have a great opportunity to prove themselves right.

“We have a good football team,” Carr said. “This offense is probably the best offense I’ve been on since I’ve been in the NFL. This defense has talent all over it. Now, they have a few big plays here and there that they want back and all those things, but man, I see it in practice. I see what it could be.”