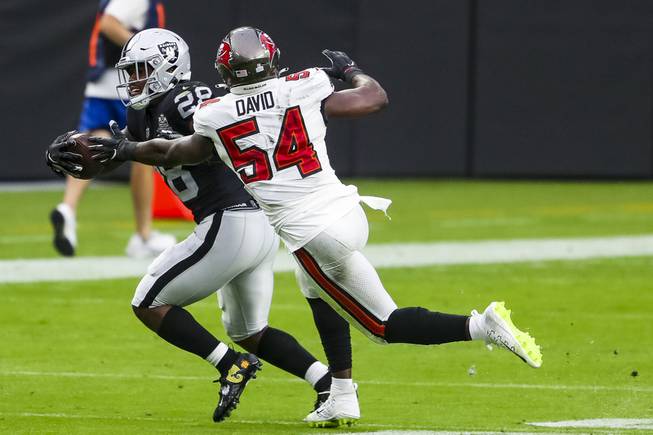 Las Vegas Raiders running back Josh Jacobs (28) runs the ball as Tampa Bay Buccaneers inside linebacker Lavonte David (54) attempts to tackle him during a game at Allegiant Stadium, Sunday, Oct. 25, 2020.

Las Vegas’ second-year featured back had the least effective game of his career in a 45-20 loss, gaining only 17 yards on the ground off 10 carries. And this wasn’t a case of a big loss or two skewing the statistics; Jacobs’ longest run was only five yards.

It was the type of performance a lot of players of Jacobs’ caliber would want to quickly forget about and move on from, but that was not his response.

“I wouldn’t say I put it behind me because I was embarrassed,” Jacobs said. “It was something where I kind of went and looked at film, I watched practice, I watched previous games. I was just trying to see where I could improve.”

The struggles are nothing new as it’s starting to look like the 5-foot-10, 220-pound Jacobs might be succumbing to a dreaded sophomore slump. Out of 37 NFL players with at least 50 rushes on the season, Jacobs sits second-to-last at 3.4 yards per carry.

And even though he spent the offseason working to involve himself more in the passing game, Jacobs hasn’t been much more than a final check down option for Derek Carr with 18 catches for 122 yards on the season.

Should the Raiders actually be concerned about a player who fell just short of winning last year’s Offensive Rookie of the Year award or is this all just bluster off a short six-game sample?

Let’s make both cases below to try to come to a conclusion.

Running back performance is significantly correlated to offensive line play. The Raiders’ have encountered more injuries and issues along its offensive line than any other position group this season.

Last week specifically, the unit was faced with a monumental disadvantage after right tackle Trent Brown tested positive for coronavirus and the rest of the starters were unable to practice after coming into contact with him.

“We weren’t all on the same page at the same time,” Jacobs said. “We were slow getting to certain reads, certain things. (The problem was) probably just not being able to get a full week of practice — technically, it was two weeks for those guys — and coming out to play.”

Las Vegas has played exactly one series — a three-and-out opening sequence at Carolina — with its planned starting offensive line. That could be about to change.

Raiders coach Jon Gruden said Brown may be able to return for the Week 8 game at Cleveland, and even though left guard Richie Incognito is doubtful to join back from his Achilles injury this week, he’s not far behind. At full strength, this is a line that’s demonstrated their ability to run block.

Last year, it ranked sixth in the league with 4.63 adjusted line yards, a metric that determines blocking success on run plays.

Tampa Bay, by the way, might have the best rush defense in the league. It rates first in surrendering only 3 yards per carry and sits second in rush defense by Football Outsiders’ DVOA.

Cleveland is more mediocre against running backs, giving up 3.8 yards per carry and coming in at 19th by DVOA. Clogged lanes could become open holes regardless of who’s blocking, just based on the opponent.

The Raiders unanimously seem to agree that Jacobs has been, “an inch or two away from some really big runs,” in quarterback Derek Carr’s words. Jacobs’ longest run of the season so far is 16 yards.

“I know it hasn’t been stat-wise as he wanted but he knows and I know that some of these runs are just so close from popping and being some explosive gains,” Carr said.

Jacobs is not equipped to be an every-down back.

That was the knock on him coming out of Alabama, where Jacobs was never the team’s leading rusher and split time with future pros like Damien Harris and Bo Scarbrough. Jacobs made those cries look laughable last season when he ran for 1,150 yards and seven touchdowns on 242 attempts, but maybe there was something to the criticism.

“Some of the schemes we’ve played against are sold out to stop the run,” Carr said.

The aforementioned points in Jacobs’ favor can all be countered too. Although the Buccaneers are great at stopping the run, the New Orleans Saints are the only other team the Raiders have played that rate above average against the ground game.

In other words, Las Vegas has faced a weak slate of rush defenses — an average rank of 19th — and Jacobs still hasn’t produced. Or, just as likely, the offensive line hasn’t produced.

The unit’s adjusted line yards have plummeted to 3.97 this year, 27th in the NFL, and it might be misguided to expect Incognito and Brown coming back to serve as a cure-all. The line, as currently constructed, is better suited to pass block.

There are also conflicting reports on Jacobs’ health. He said he felt fine on Wednesday, but he was listed as limited in practice with a knee injury and Gruden described him as “beat up, no doubt” earlier in the week.

If Jacobs is dealing with lingering injuries, it would make sense that they’ve zapped him of some of his explosiveness. But that explosiveness is exactly what Gruden says the Raiders need more of out of the running back, and it might be hard to get him back healthy with the bye week passed and games for the next 10 weeks straight.

“The one thing we’re lacking right now is a long run,” Gruden said. “We need a breakout run. We need a big run. We haven’t had that yet but we’re making positive yards, moving the ball, doing a lot of good things.”

The ultimate answer, as it almost always does with these sorts of things, rests somewhere in the middle of the two extremes.

Jacobs has 116 carries, fourth-most in the league on a per-game basis, so there’s been more than enough trials to conclude that something isn’t right. At the same time, circumstances have worked against him and he’s unlucky not to have broken loose on at least one handoff or two.

The Raiders’ offense, as Gruden indicated, has been terrific though. It’s ninth in the league at 6 yards per play and has carried the Raiders so far.

The passing game, despite what purists may argue, is more important to success in the modern NFL than the running game. And Las Vegas’ passing game has been consistently great, perhaps in part because of defense’s overemphasis on Jacobs.

The Raiders have larger issues than their running back. Jacobs will be just fine, even if he doesn’t come close to matching the production of his rookie season.