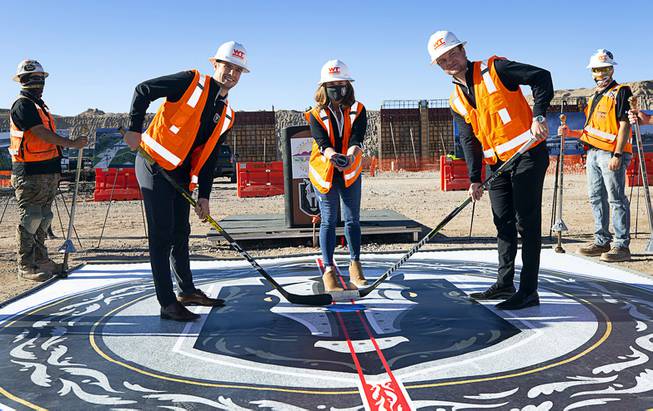 Henderson Mayor Debra March, center, poses for a ceremonial puck drop with Vegas Golden Knights’ Gage Quinney, left, and Reid Duke during the celebration of a construction milestone at the Henderson Events Center construction site Wednesday, Oct. 28, 2020. The multi-purpose, 6,000-seat indoor events center will be the arena for the Henderson Silver Knights.

They were at the heart of the construction site for the Henderson Event Center, the future home of the city’s minor league hockey franchise, as an assembled group of construction workers, local politicians and Golden Knights staff gathered Wednesday to commemorate the evolving structure.

“It’s going to be jaw-dropping, I guess you could say, when it first opens,” Quinney said. “It’s huge. Park area, concert area, it’s just a big family gathering. It’s going to be exciting.”

Once it opens, the Henderson Event Center — which will seat about 6,000 — will be home to the Silver Knights but also to high school and college graduations, the Henderson Symphony Orchestra, community events and more. At the site of the old Henderson Pavilion, it was approved for renovation to the new facility earlier this year.

March projected it will generate $17 million to $26 million of annual economic impact, $40 million in tax revenues over the next 20 years, and 122 jobs. She said the timing for an investment of that size — about $84 million split between the city and the Vegas Golden Knights — was right considering everything going on.

“During this time of uncertainty brought on by the COVID-19 pandemic, knowing that we can provide critical opportunities to create revenue and stability in our economy in Henderson is so important,” March said. “We envision the Event Center as the epicenter of cultural activity, entertainment and local performing arts in our community.”

While the facility is under construction, the Silver Knights will play the next two seasons at Orleans Arena, whenever next season begins. The AHL announced Wednesday that Feb. 5 is the targeted start date for the season, but things can always change depending on how the coronavirus is being handled in AHL markets come February.

It puts the players in a tough spot. Both Quinney and Duke traveled with the Golden Knights to Edmonton for the postseason bubble, though neither played. The last game for both of them was in March, and it could be 11 months between competitive hockey games.

“It’s a weird situation that no one has ever gone through,” Duke said. “It’s been such a weird year and it’s kind of dragging on a little bit, so it’s just making everyone a little bit more excited to get things going.”

The fact that Henderson is getting a minor league hockey team is another testament to how quickly the Golden Knights ingrained themselves in the valley. Quinney this season became the first Nevada-born player in NHL history and he said he could have never imagined a professional hockey team in his hometown, much less two.

The Silver Knights logo was everywhere Wednesday: on the makeshift center ice, on the mayor’s face covering, on the gates to the construction site and even on light poles on Paseo Verde Parkway and South Green Valley Parkway.

“The narrative was that it was a bad idea to put a professional hockey team in the desert,” Golden Knights president Kerry Bubolz said. “So guess what we did? We decided to put two teams in the desert.”