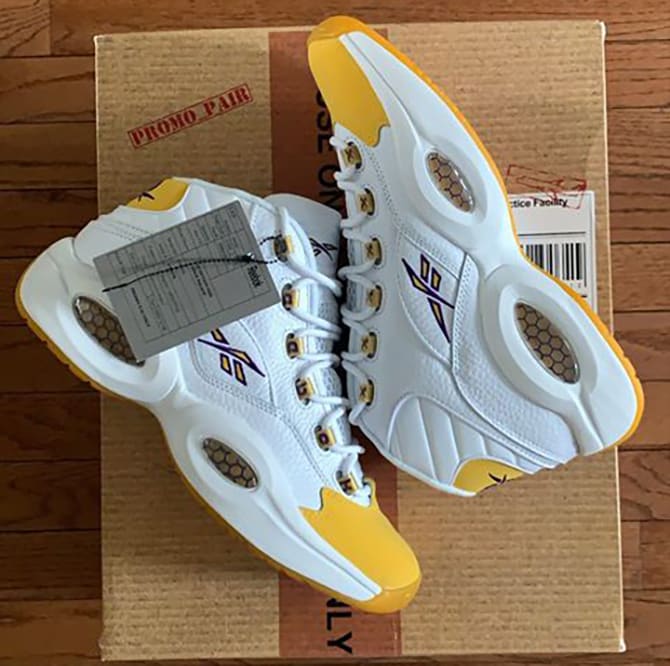 Originally planned for a launch during NBA All-Star Weekend in Chicago this past February, the “Yellow Toe” Reebok Question, inspired by a Player Exclusive pair worn by Kobe Bryant during his season of sneaker free agency in 2002-03, had been ‘canceled’ by the brand following the tragic and unexpected death of the legendary Los Angeles Lakers guard in late-January.

“It was originally slated to launch earlier this year, but we pulled it from [direct-to-consumer] and wholesalers in light of Kobe’s death,” Reebok told Complex about the decision back in May.

Not much was said publicly about the shoe following the cancellation announcement, but footwear designer Frank Cooke, who had a hand in getting Reebok to produce the long-coveted colorway, expressed optimism that it would eventually make its way to retail. Now, we have confirmation that’s indeed the case.

This fall, Reebok will release an “Alternates” Pack featuring three shoes linked to alternate NBA uniforms. The “Yellow Toe” Question represents the Lakers’ Sunday whites. Another Question will be decked out in black and gold as a nod to the 1997 Philadelphia 76ers uniform change. There’s also a red and black Kamikaze II (debuted on the court by Montrezl Harrell earlier this month) that takes its cues from the late-90s Sonics alternate red uniforms. Lakers guard Quinn Cook debuted the “Yellow Toe” Question in the tunnel ahead of Game 4 of the Western Conference Finals.

As of now, Reebok hasn’t announced official release dates for the “Alternates” Pack, but expect word to come down soon.

UPDATE (11/03): New details have emerged regarding the “Yellow Toe” Question Mid release as the PE colorway is now scheduled to hit stores on Nov. 28 for $150. A release date for the other sneakers in the “Alternates” Pack remains unknown, but stay tuned for updates.