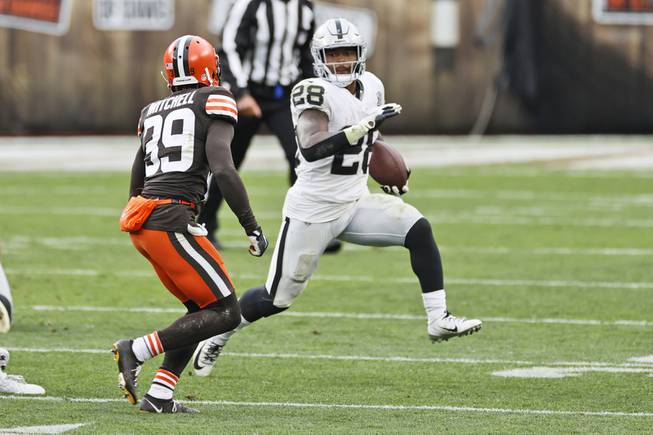 Josh Jacobs was not a factor down the stretch last year, but after carrying the Raiders to a win at Cleveland last week the sophomore running back is poised for a much stronger finish in 2020.

Jacobs carried 31 times and churned out 129 yards against the Browns, both season highs, and Las Vegas needed every bit of that production in grinding its way to a pivotal 13-6 road victory. It was Jacobs’ best individual performance of the season and a reminder of how impactful he can be when he’s at his best.

Head coach Jon Gruden praised Jacobs for delivering on the field and in practice with equal intensity.

“He’s a great finisher and has great stamina,” Gruden said. “He carries 31 times; a lot of backs would come out on Wednesday on a hot day and take the day off. He led our team in terms of effort again [on Wednesday].”

Before he carved up the Cleveland defense, it had been awhile since Jacobs turned in a game like that. A shoulder injury limited his effectiveness late in 2019 and eventually forced him to finish the season on the sideline, and he got off to a slow start in 2020.

Jacobs averaged 4.8 yards per carry during his sensational rookie season, but he failed to crack the 4.0 mark in five of the first six games this year. His production cratered two weeks ago, when he carried 10 times for a career-low 17 yards in a loss to Tampa Bay. That brought up questions about a sophomore slump, especially with his backup, free-agent signing Devontae Booker, pumping out 6.2 yards per carry behind the same offensive line.

Jacobs reversed that trend in Cleveland, as he blended speed, quickness, vision and toughness while accounting for 41.7 percent of Las Vegas’ total offense. He is now up to 523 rushing yards on the season with five touchdowns on the ground.

Jacobs is still averaging just 3.6 yards per carry, but he should have a chance to juice that number again on Sunday against a Los Angeles Chargers defense that ranks 27th in the NFL in rushing defense (4.7 yards allowed per attempt).

Sitting in the thick of the playoff race with a 5-3 record and a slew of beatable opponents dotting the upcoming schedule, Las Vegas is counting on Jacobs to bounce back from his slow start and power the team to the finish line.

Offensive coordinator Greg Olson believes the Raiders’ offensive identity over the second half of the season will largely be dependent upon Jacobs and the ground game.

“It’s who we want to be,” Olson said. “We feel like we have to run the football to stay balanced and to open up the things we want to open in terms of the play-action pass and things. A big part of what we do is the run game, and obviously Josh is a big part of it. We’re extremely happy with him after his rookie season, and we like where he’s at right now in terms of his second season.”