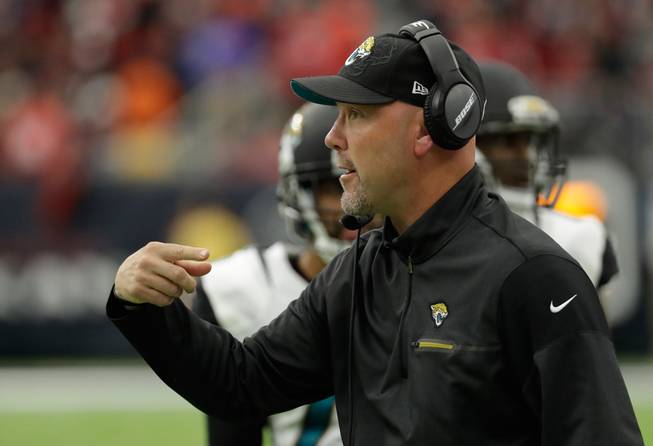 Jacksonville Jaguars head coach Gus Bradley is shown during the first half of an NFL game Sunday, Dec. 18, 2016, in Houston. Team owner Shad Khan announced that Bradley was fired following a 21-20 loss at Houston on Sunday.

The architect of the famed “Legion of Boom” defenses is coming to Las Vegas.

Gus Bradley, known for helping build the Seattle Seahawks’ defense to one of the best in the league early last decade, will be the Raiders’ next defensive coordinator. The team announced the move with a release Tuesday morning with Bradley scheduled to speak to the media shortly.

Bradley spent the last four season as defensive coordinator of the divisional rival Los Angeles Chargers, which fired coach Anthony Lynn last week. He also spent 2013-2016 as the head coach of the Jacksonville Jaguars, ascending to the role because of his success in Seattle.

Bradley left the Seahawks the year before they ultimately won the Super Bowl, but they did it behind a defense he set into place. Seattle had a tenacious pass rush and one of the best defensive backfields in the history of the NFL — two areas where the Raiders have been sorely lacking for years now.

Las Vegas fired defensive coordinator Paul Guenther after a Week 14 loss to Indianapolis and installed Rod Marinelli in the role with an interim tag. The defense didn’t improve over the final three games and played a large role in eliminating the Raiders from playoff contention.

It became clear the Raiders would look outside the organization to fill the vacancy, though coach Jon Gruden expressed optimism in keeping Marinelli on staff, and they quickly zeroed in on Bradley as their choice.

UNLV works out the kinks in blowout win over Saint Katherine