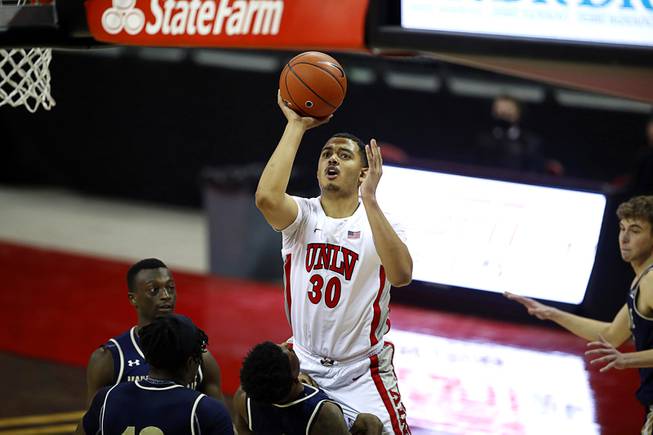 UNLV Rebels forward Devin Tillis (30) takes a shot during the Rebels’ season opener against Montana State at the Thomas & Mack Center Wednesday, Nov. 25, 2020. Tillis as called for an offensive foul on the play.

UNLV basketball needs a win right now in the worst way. But what the team needs even more than a tally in the W column is actual court time against a real opponent.

Head coach T.J. Otzelberger is hopeful they’ll get both this afternoon, when UNLV takes on St. Katherine in a hastily scheduled home game. At 1-6 and coming off back-to-back losses at Colorado State, the players could certainly use the confidence boost that comes with stomping an NAIA opponent; Otzelberger’s emphasis, however, seems to be less on running up the score and more on getting his players some extended minutes together.

That’s why he added St. Katherine and Benedictine Mesa to the schedule last week.

“It gives us a chance to get another game in and give guys some minutes,” Otzelberger said. “Guys like Reece Brown and Edo Del Cadia, who are playing more minutes for us, they need those game minutes.”

As strange as it sounds, UNLV is running out of time to build on-court chemistry, mostly due to the 34-day gap between games because of the COVID-19 outbreak that ravaged the program. The team is right at the midpoint of the initial 2020-21 schedule, with only 14 conference games remaining on the slate. And yet, newcomers like Brown and Del Cadia have logged just 35 and 58 minutes on the season, respectively. Devin Tillis, a freshman who was expected to play a key role in the frontcourt, has played 51 minutes.

The games against St. Katherine and Benedictine Mesa (Jan. 21) should give Otzelberger a chance to put his less-experienced players through the paces in real time.

And even the guys with the most experience, like junior guard David Jenkins, should benefit from additional time on the floor with teammates, considering they’ve played just seven games to this point.

The St. Katherine contest will also kick off a six-game home stand for UNLV, and though the season began two months ago, this current UNLV team has almost no experience in the Thomas & Mack Center.

“We’ve played one home game at this point,” Otzelberger said. “Just having the opportunity to play another game at home before we start a home stretch in league play is really important, so guys get used to playing at the Mack and our facilities.”

National championship by the odds: Vegas picks of Alabama vs. Ohio State