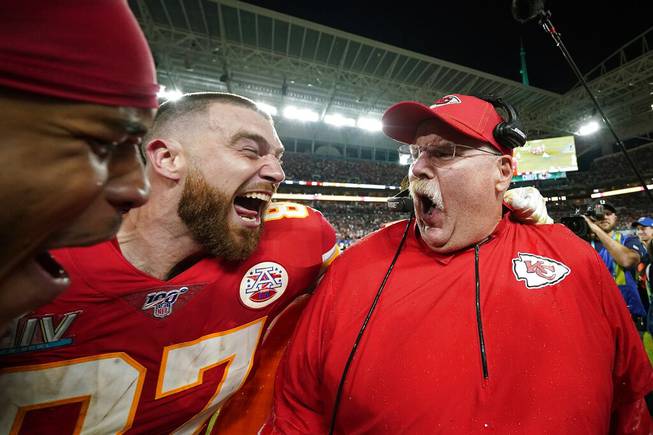 Now wait, wasn’t it just last week I used this space to declare that home field no longer mattered in the NFL and received further evidence with road teams going 4-2 straight-up and against the spread over wild-card weekend? Yes, but the hypothesis here is that the divisional-round success of higher-seeded teams has less to do with actual home field advantage.

It has more to do with rest. Getting a first-round bye and rest after a taxing regular season is the biggest advantage in the NFL playoffs.

And for the first time, because of the NFL’s new postseason format, only two teams get that luxury this year — the Kansas City Chiefs and Green Bay Packers. Don’t underestimate that advantage when handicapping this weekend’s game.

Read below for picks on every divisional-round game, separated into three confidence categories and listed in rough order of confidence. Lines are the best currently available in Las Vegas on the chosen side. The record for the year stands at 137-117-8 after going 5-1 last week.

Green Bay Packers -6.5 vs. Los Angeles Rams This is a matchup of the best offense in the NFL (Green Bay) against the best defense (Los Angeles) by almost any metric. And there’s a case to be made that the gap between the defenses is larger than the gap between the offenses. Because of that and a plus matchup in the Rams’ favor — Green Bay’s rush defense is its weakness and Los Angeles is one of the NFL’s best rushing teams — this line would be too high at any other point of the season. But these are different circumstances. Just as important as the Packers’ rest are the Rams’ injuries. Regardless of whether they start Jared Goff or John Wolford, they won’t have a quarterback that’s 100%. Add Aaron Donald and Cooper Kupp to the list of the ailing Rams and there’s just more negative effects than this line is capturing.

Baltimore Ravens +2.5 at Buffalo Bills There’s been more chatter about the offenses — because there’s always more chatter about the offenses — but the defensive discrepancy may prove to be the difference here. The Ravens are significantly better than the Bills on defense. Baltimore is sixth in EPA per play on defense to Buffalo’s 18th. Even worse, the Bills are beset by poor rush defense — exactly how the Ravens can best attack them. Buffalo’s defense has improved as the year has gone on, but so has Baltimore’s offense. These teams are now moving the ball with near equal efficiency. The Bills have been more consistent but the Ravens have the higher ceiling. Baltimore showed it last week as the 20-13 final score in their victory over Tennessee failed to capture just how dominant it was in racking up a massive 2.4 yard per play edge. There’s probably not enough value to bet the Ravens unless this reaches +3, but this looks like a case where the better team is taking points.

Kansas City Chiefs -10 vs. Cleveland Browns This line caused a lot of sticker shock when it posted, but why? It’s a completely fair price. Cleveland is the one intruder left in the playoffs in terms of efficiency. Fans and casual bettors have a hard time accepting the role luck plays in the outcome of football and the fact that a team that’s really not all that great can make it this deep. But Cleveland is really not that great. Even last week, the Steelers practically handed the Browns a 28-0 lead and they still had to grind out a 48-37 victory as 6-point underdogs. That win put the Browns’ point differential on the year at 0 — obviously more befitting of a 8-8 or 9-8 team than one that’s caught a lot of breaks to sit at 12-5. That scoring margin is 111 points worse than their opponent’s — and there’s a case to be made that the Chiefs cruised through the season waiting for this moment to amp up and defend their Super Bowl title. Kansas City’s offense has been uncharacteristically vanilla over the second half of the season, the direct opposite of how it usually looks when coach Andy Reid has extra time to implement a game plan. He has extra time here. The fair price would be Kansas City -8.5, but its built-in advantages after a bye week seem well worth the 1.5-point surcharge.

Tampa Bay Buccaneers +3 at New Orleans Saints How about this take: From top to bottom, these are the two best rosters in the NFL. Tom Brady and Drew Brees are no Aaron Rodgers and Patrick Mahomes at this point of their careers, but from an overall perspective, neither the Saints nor the Buccaneers have any real weaknesses. They’re so close from an efficiency perspective that the right play is taking the points with whichever side is the underdog. Yes, even though the Saints beat the Buccaneers twice during the season, and despite the old cliché to the contrary, teams that are 2-0 against a particular opponent are historically a strong bet to win the third meeting. It’s hard to explain away Tampa Bay’s 38-3 loss to New Orleans as 3-point favorites in November, but the first meeting between the two teams was one of the more misleading final scores of the season. The Saints beat the Buccaneers 34-23 as 4-point favorites mostly because of some uncharacteristic Brady turnovers in a game where they were highly inefficient on offense. Brady is making fewer mistakes now that he’s settled into coach Bruce Arians’ offense. Tampa Bay has climbed to No. 2 in Football Outsiders’ weighted DVOA metric — which grades recent performance higher — with New Orleans falling to No. 7. A coaching mismatch in the Saints’ favor with Sean Payton makes it difficult to get too excited about backing the Buccaneers, but from an on-field standpoint, the visitors aren’t at a disadvantage here.

The next wave: Who are the Golden Knights’ top prospects?