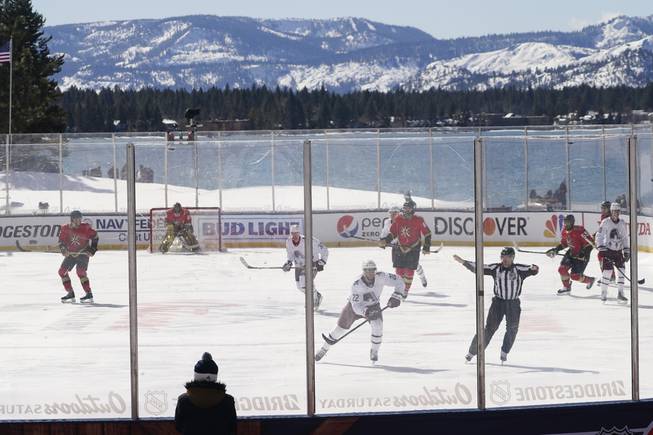 STATELINE — The game lasted 10 hours, 37 minutes, by far the longest game the Golden Knights have ever played.

It was a unique Saturday, starting on a gorgeous afternoon at the Edgewood Tahoe Resort on the shores of Lake Tahoe. The game was postponed after the first period due to ice issues, and when the game resumed Vegas could never take the lead and fell to the Colorado Avalanche 3-2.

The Avalanche got things going early in the first period, taking advantage of a mismatch with their first line against Vegas’ fourth and scoring 2:58 into the contest.

That was all the scoring when the sun was in the sky, as that sun started to melt the ice, and caused a postponement until the second period started at 9 p.m. The second goal of the game came exactly nine hours after the first, when Alec Martinez put home a rebound to even the game 1-1 at the 7:37 mark of the period.

Avalanche star Nathan MacKinnon restored the Colorado lead at the 11:18 mark of the second, taking the puck away during 4-on-4 play and rushing through all three zones in a tremendous individual effort to score.

The Golden Knights didn’t find the equalizer again. The third period didn’t go by without chances, as Vegas had 1:22 of 5-on-3 power-play time, but mustered one shot on goal with two extra men. Vegas made its pushes, but Devon Toews’ blast with 6:49 put the Golden Knights in a 3-1 hole.

Alex Tuch made sure the game didn’t end quietly. He had one of the best goals of his career with 5:32 remaining in the game, walking in on Colorado goalie Philipp Grubauer, spinning in front of the crease and lifting a backhand into the net to bring the game back within in a goal.

The Golden Knights and Avalanche will conclude their four-game series on Monday in Colorado.

The Golden Knights returned after nearly seven hours Saturday for the second period and traded goals with the Colorado Avalanche, finishing the frame in a 2-1 hole at an outdoor rink on the shores of Lake Tahoe.

The Golden Knights started off the second period on the penalty kill and went right back to it 3:18 into the period. William Carrier slapped the puck over the glass for a delay of game penalty, which was ironic considering the seven-hour delay.

Vegas killed it off moving to 3-for-3 the game, but was behind 23-8 at the first TV timeout and did not generate one until 7:36 of the period and led to a goal.

The shot was Alex Pietrangelo’s, a harmless wrister from the point but it led to a juicy rebound that Alec Martinez was all over, and he put it home to tie the game at 7:37.

Between Martinez’s goal and Samuel Girard’s in the first period, the game went nine hours exactly between goals.

The Golden Knights couldn’t stop taking penalties. Colorado’s Tyson Jost interfered with Vegas’ Chandler Stephenson but instead of a Golden Knights’ power play, Stephenson retaliated with a cross-check and the teams went to 4-on-4.

That was a mistake by Vegas, as Nathan MacKinnon took over for the Avalanche. He stole the puck from Mark Stone and skated the length of the ice on his own, zooming through all three zones and beating Marc-Andre Fleury clean to give Colorado a 2-1 lead at 11:18 of the second.

The Golden Knights did get a power play in the period after a Joonas Donskoi goalie interference, but did not score. It was wiped away with 29 seconds remaining by another Vegas penalty.

And so the longest intermission in Golden Knights history came to an end, and they resumed their game with the Colorado Avalanche.

Vegas started its game at noon today, finished the first period down about 1 p.m. and found out about 2 p.m. the game would be delayed seven hours after the bright sun caused the ice to melt in places, creating unsafe ice conditions.

The Golden Knights and Avalanche returned to their hotel rooms before retaking the ice about 8:30 p.m. for their second warmup of the day. At about 9 p.m., the game continued.

The game will pick up in the second period with the Golden Knights trailing 1-0 after a Samuel Girard goal at 2:58 of the first period. It seems like forever ago, but Vegas still has some penalty time to kill, and will start the period in a brief 5-on-3 penalty kill.

The first period did not go the Golden Knights’ way, finishing down a goal and in a 17-8 hole in shots on goal.

The Golden Knights gave up an early goal Saturday and trailed the Avalanche 1-0 in a game played outdoors on the shores of Lake Tahoe. But that was the least of the problems during the game.

Commissioner Gary Bettman announced just after 2 p.m. that the game would be delayed until 9 p.m., continuing the game almost nine hours after it started because of the sun beating down on the ice and melting parts of it.

Soft ice caused a delay after the first period, where the normal 18-minute break was pushed to 30 minutes before the break lasted more than hour before Bettman made the announcement. The heat from the sun created puddles that caused issues with players skating.

“The plan is we concluded, after consulting with ice makers and both teams, it’s not safe or appropriate to continue this game at this time,” Bettman said on NBC. “We knew that unabated sunshine was a problem.”

The NHL spent the first intermission determining if the game should continue. NHL rules say once a game has begun it can be paused at the commissioner’s discretion. If a game cannot continue, it is considered official after two periods, and the team winning after two periods if a game cannot be completed is declared the winner and awarded two points in the standings.

During the first period, viewable in-person by the media, ice crews spent extra time on the ice, patching the holes and shoveling snow off the ice.

“We’ve done over 30 outdoor games,” Bettman said. “This has been the most difficult weather circumstance we’ve had, and it’s a beautiful day.”

The NHL also moved Sunday’s game between the Bruins and the Flyers, originally scheduled for noon at the same outdoor rink, to 4:30 p.m. to avoid the same issues.

Practice on Friday featured cloud cover, so the issues did not become apparent. Players said after practice they were more worried about the wind and did not bring up any concerns from the sun. Forward William Karlsson even said he hoped for a bright sunny day.

The Golden Knights are scheduled to play next on Monday against the Avalanche in Colorado.

Weekend wagers: Getting into the action with five bets across five sports