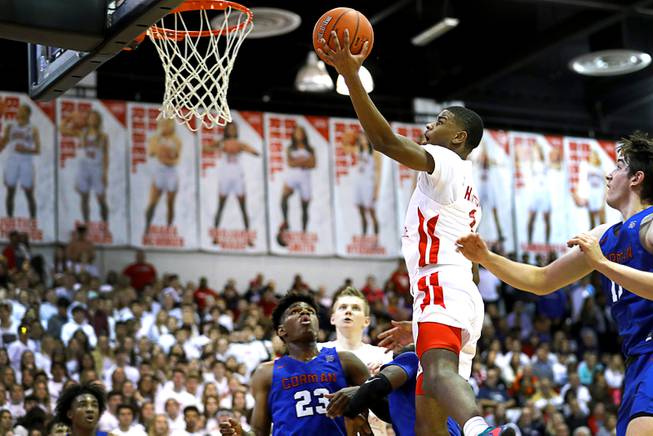 Coronado’s Jaden Hardy (1) lays up the ball during a game against Bishop Gorman at the Cox Pavilion at UNLV Friday, Jan. 24, 2020.

Nevada didn’t have a high school basketball season because of the pandemic.

Hardy was one of 24 players nationally picked today for the annual McDonald’s All-American game. The game also won’t happen because of the pandemic.

The accomplishment is still significant, especially considering its history. It started in 1978 and has featured a who’s who of notables — “many of whom are known by a single name: Shaq, Lebron, Candace, A’ja,” according to a statement announcing the rosters.

“Giving All Glory to God,” Hardy posted on Twitter. “Blessed to be a burger boy.”

Hardy, a 6-foot-5 guard, was the state Gatorade Player of the Year in 2020 as a junior when he averaged 30.4 points per game. He also added 9.1 rebounds and 8.4 assists per game in leading Coronado to the regional semifinals.

The Cougars, with Hardy and Frankie Collins leading the way, would have been projected as one of the favorites to win the state championship if Nevada conducted a season.

Hardy is a five-star recruiting prospect and ranked as one of the graduating class of 2021’s top overall prospects. He’s limited his college choices to 12 schools but is widely considered to be a candidate for the new G-League professional pathway program. That’s where top professional prospects compete against teams in the NBA developmental league — while earning a salary — and then become draft eligible after one season.

Yes, Hardy is that good.

He’s the first McDonald’s All-American in Coronado history. The school opened in 2001.

Las Vegas last had a McDonald’s All-American in 2017 with Troy Brown Jr. of Centennial and Charles O’Bannon Jr. from Bishop Gorman. Brown is in his third NBA season with the Washington Wizards, and O’Bannon plays in college at TCU.