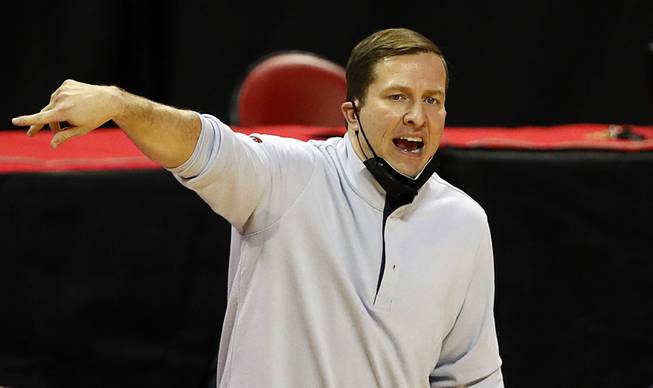 UNLV Rebels head coach T. J. Otzelberger calls out to players during a game against the Utah State Aggies at the Thomas & Mack Center Wednesday, Jan. 27, 2021.

The Mountain West announced on Tuesday that it will be playing makeup games the week before the conference tournament — a move fraught with risk for the teams that currently sit on the NCAA Tournament bubble.

UNLV will play two makeup games, hosting San Diego State at the Thomas & Mack Center on March 3 and then traveling to Wyoming on March 6. Earlier this season UNLV had its two-game series against both opponents postponed by positive COVID-19 results.

The league’s coaches had gone on the record in recent days as wanting to bypass any makeup games and head straight to the Mountain West tournament. Teams like San Diego State, Colorado State, Utah State and Boise State, which harbor NCAA hopes, will now have to navigate additional contests against the conference’s bottom-dwellers and hope to avoid bad losses that could hurt them on selection Sunday.

The Mountain West released a statement that cited “contractual obligations” as one of the reasons for the eight additional contests.

Last week, UNLV head coach T.J. Otzelberger questioned whether makeup games would be worth it considering the COVID-19 risks each team would have to assume, especially so close to the Mountain West tournament.

UNLV is currently 10-11 on the season and 7-7 in the Mountain West. The scarlet and gray will host Fresno State on Wednesday and Friday, then play the two makeups for a total of 18 conference games.