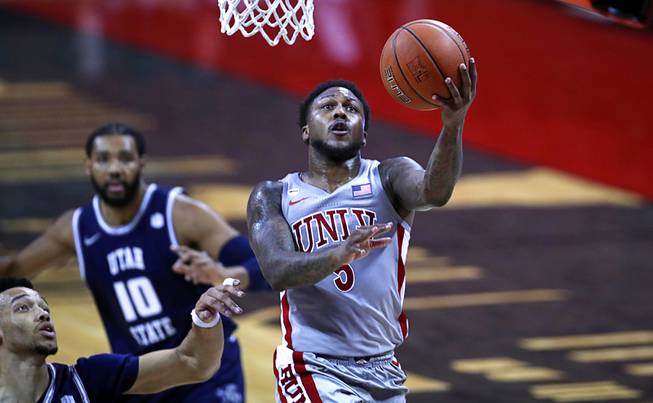 It has been a long season for David Jenkins.

After some early struggles, Jenkins is closing the 2020-21 campaign on a hot streak and finally playing like the difference-maker UNLV expected him to be. Now one of the more important questions facing the program in the offseason will the junior guard’s fate.

Jenkins, a native of Tacoma, Wash., committed to UNLV in the summer of 2019 amid much fanfare; he was coming off a superlative sophomore year at South Dakota State in which he averaged 19.7 points per game and was considered one of the very best shooters in the country. T.J. Otzelberger, who coached Jenkins with the Jackrabbits, had to beat out Gonzaga and Oregon in order to secure Jenkins’ commitment.

After a redshirt year, Jenkins got off to a slow start in 2020-21. He made just seven of his first 32 shots over UNLV’s first three games as the scarlet and gray opened the season 0-3. Things continued to clunk along after that, as UNLV battled through COVID-19 outbreaks, canceled games and program pauses, all of which undoubtedly conspired to hinder Jenkins’ shooting rhythm.

In the second game of UNLV’s series at Colorado State on Jan. 9, Jenkins got hot and poured in 29 points on 13-of-19 shooting. Since then he has shot the lights out, and with two games left on the schedule he once again ranks among the country’s top marksmen.

Jenkins has been particularly on-target since the start of conference play, hitting 44.0% from long range against MWC opponents. He has made 19 3-pointers in UNLV’s last five games.

Early in the season Jenkins believes he was rushing his shot, but as he has found his rhythm he has been able to fire away with much better accuracy.

“Lately I’ve been doing a good job of being prepared before I even get the ball for my shot,” Jenkins said. “Earlier in the season I was getting the pass in my hands and then shooting. When you’re a shooter, you’ve got to be ready before you get the ball. I know I can shoot the ball at a high level, so honestly it’s just about making sure my feet and hands are ready, making sure I’m low and ready. Sometimes when I’m not ready I’m straight-legged, but now I’m locked in, low and loaded.”

Even with his terrific outside shooting, things haven’t gone smoothly for Jenkins over the second half of the season. His defense has been shaky, and Otzelberger has more than once criticized the lack of leadership being provided by the team’s upperclassmen — a clear dig at Jenkins, among others.

At the beginning of February, Otzelberger removed Jenkins from the starting lineup. The move has not affected Jenkins’ jumper; in six games off the bench he has attempted 41 long-range shots and made 19, good for a red-hot 46.3%.

Jenkins, who is averaging 26.5 minutes per game off the bench (compared to 29.0 minutes in the 15 games he started) didn’t take issue with his coach’s criticism and said he’s OK with his reserve role.

“At the end of the day I just want to do whatever I can to win,” Jenkins said. “Coming off the bench, starting, it doesn’t really matter to me. I didn’t want to play the blame game. I don’t think I did a good job leading these guys, especially with me being one of the older in the group. Honestly, I like [coming off the bench] because as the game is going on I can see their defensive plan, then I can come in and exploit the defense. It’s not like a big thing for me. I’ll do whatever I can. The coaches still ask me to do the same thing: Try to score the ball at a high rate. If anything, coach tells me to score even more. Coming off the bench and giving us an extra burst is a really good thing for us.”

Jenkins is still UNLV’s second-leading scorer at 15.0 points per game and he remains an integral part of the gameplan as UNLV readies itself for the Mountain West tournament. Beyond that, Jenkins’ future remains up in the air. He is a junior, and with the NCAA granting all players an additional year of eligibility due to the COVID-19 pandemic, Jenkins has two years of college eligibility remaining after this. And yet, he’s not a lock to return to UNLV in 2021-22.

First, there’s the question of his role on the team. Being moved to the bench midway through the season — something most players would consider a demotion — may lead to him searching out greener pastures in the offseason, especially with the NCAA expected to pass a rule granting transfers immediate eligibility.

Second, this is Jenkins’ fourth year in college. After two years at South Dakota State, a redshirt year at UNLV and one year suiting up for the scarlet and gray, he’s been a student for a long time now. How much longer does he want to stay on campus before setting off and trying to make a living in the pro game?

As to whether he intends to return to UNLV next year, Jenkins said he has not yet considered his future plans.

“I’m just living in the moment with my teammates,” Jenkins said. “I haven’t thought about that. I’m trying to stay present. I love being here at UNLV. It’s been a blessing being here.”