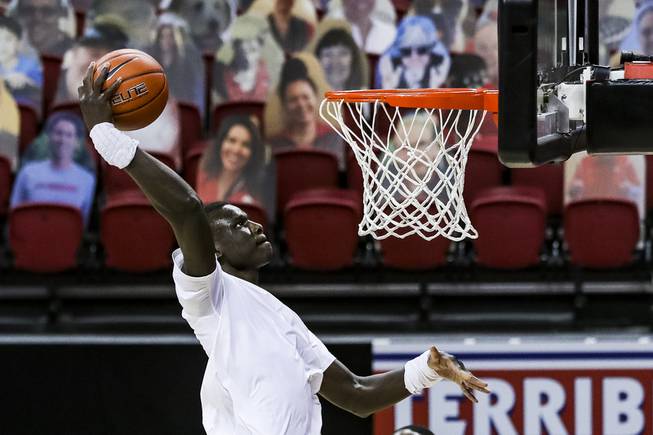 UNLV Rebels forward Cheikh Mbacke Diong (34) dunks the ball prior to a game against the Air Force Falcons at the Thomas & Mack Center, Monday, Feb. 8, 2021.

UNLV got back to .500 in Mountain West play (7-7, 10-11 overall) by virtue of a two-game sweep at San Jose State last week, and now the scarlet and gray will try to keep that momentum going when they host Fresno State for a two-game set at the Thomas & Mack Center starting tonight (8 p.m., FOX Sports 1).

T.J. Otzelberger has spent all season trying to figure out a way to maximize his team’s production, and against San Jose State the answer was throwing the ball into the post on offense. That old-fashioned method worked — for two games, at least — as freshman Devin Tillis backed his way in and had good success down low.

Will UNLV stick with that kind of methodical offensive approach, or was it an opponent-specific wrinkle? We should find out in the first few possessions against Fresno State.

Junior guard David Jenkins got off to a slow start this year, but he’s been on fire over the second half and now ranks No. 16 in the nation in 3-point shooting (43.3%). He has been deadly off the bench of late, checking in with a green light and making 19 3-pointers over the last six games.

Now that their best outside shooter is locked in, can UNLV find a way to get him more open looks? Jenkins is averaging 6.0 long-range attempts per game, but the UNLV offense could be even more efficient if they can get him up to eight or nine attempts. Keep an eye out for designed plays run to spring Jenkins free beyond the arc.

Fresno State big man Orlando Robinson is a tough cover. He is 7-feet tall and has the range to step out and shoot the ball (41.7% from 3-point range on 1.3 attempts per game), so UNLV will need a strong defensive performance from senior Mbacke Diong.

Aside from Robinson, Fresno State is bereft of offensive talent, and the Bulldogs are especially lacking in outside shooting. If Diong keeps Robinson in check, the rest of UNLV’s defenders should be able to win their matchups.