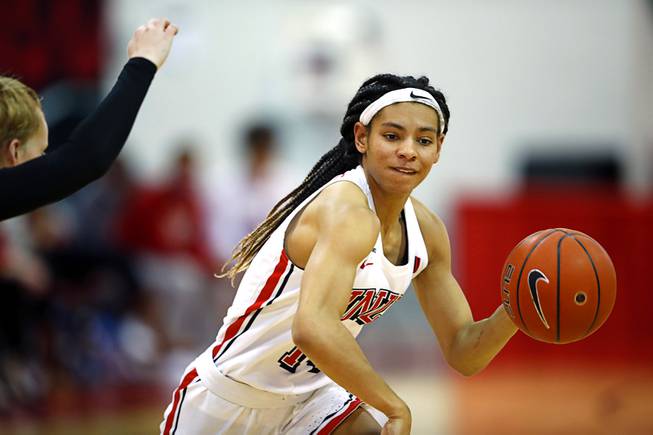 UNLV Lady Rebels guard Bailey Thomas (14) drives to the basket during a game against the Boise State Broncos at Cox Pavilion Wednesday, Feb. 10, 2021.

Every day, Bailey Thomas makes a to-do list. Lots of people do that, but her docket tends to go more in depth than your normal checklist.

“Instead of ‘Do laundry,’ I’ll have ‘Put laundry in, take laundry out, dry, fold, put laundry away,’ ” Thomas says with a laugh. “It’s a very detailed list. I just enjoy crossing things off as I go through my day.”

Maybe it’s her self-described analytical personality or her inner accounting major taking the wheel, but that’s exactly how Thomas has approached her senior year with the UNLV women’s basketball program. The former Centennial High star has methodically crossed off task after task while leading the scarlet and gray to its best season since she arrived as a transfer in 2017.

After sweeping a two-game series at San Diego State on February 15 and 16, UNLV found itself with an 11-5 record in the Mountain West Conference, tied for the most wins of any team in the conference. Thomas, with her mission-oriented attitude and attention to detail, has been the driving force in the team’s bounce-back campaign.

Her younger sister, Jade Thomas, a freshman guard at UNLV, has witnessed the list-centric behavior firsthand for a long time. “She’s definitely a planner,” Jade says. “She’ll cross something off, and it will be the most aggressive cross-off you’ve ever seen, like she just accomplished something so amazing. It’s part of her everyday life.”

The to-do list Bailey is now working through dates back to last year. The 2019-20 UNLV squad struggled to a 13-17 overall record and a 9-9 mark in conference play, culminating in a coaching change. Out was longtime head coach Kathy Olivier, replaced by former UNLV player Lindy La Rocque.

That made the first item on Bailey’s list a rather obvious one: develop a strong relationship with the new coach. As the only senior on the roster—and UNLV’s longest-tenured player—she did everything she could to make La Rocque’s transition as smooth as possible.

“Of course it’s nerve-racking—senior year, getting a new coach who didn’t recruit me,” Bailey says. “But I knew her pedigree, and I knew that me not buying in was not going to help the team. I wanted to give it a chance and make it work.”

In her first Zoom meeting with the new coach, Bailey added another item to the checklist: become a vocal leader.

Bailey’s hard-nosed, all-out style had already earned her the respect of her teammates. She was named Mountain West Defensive Player of the Year as a junior, and no one questioned her commitment to winning. But stepping up and making her voice heard in video meetings and on the practice court wasn’t something that came naturally.

Bailey made a concerted effort to come out of her shell, and the team gradually took on her personality, lists and all.

Jade had never thought of her big sister as an in-your-face leader type while growing up, but over the offseason she got a close-up look as Bailey grew into the role. “I think she’s grown to be better around people,” Jade says. “She was always good, but now I see it’s like she can influence people without forcing it. She’s always been very straightforward. We have kind of an inside joke on the team—we call her President Bailey, because she leads by example in that presidential way.”

As the season drew nearer, La Rocque gave Bailey perhaps her most difficult chore: play point guard. Bailey had no prior experience at the position, having spent her prep and early college career off the ball as a defensive-minded wing player. But as La Rocque gauged the assorted skill sets on the UNLV roster, it became clear to her that Bailey was the best option.

“It wasn’t my intention or plan, but that’s sort of how the roster fell out,” La Rocque says. “I thrust that upon her. I asked if she’d do it, and with her selflessness and willingness to do what’s best for the team, she said, ‘I’ve never done it, but I’ll try.’ ”

It was one task Bailey was not able to cross off immediately. There were growing pains, like during a season-opening loss to Northern Arizona, in which she tallied 10 points and a team-high five assists but also fouled out after just 30 minutes.

“That was her first real basketball game at the Division I level as a point guard,” La Rocque says. “We were watching film afterward, and I’m telling her you’ve got to do this, do that, and the next day at practice she was doing it. That let me know that it was going to work. With Bailey, I can talk to her, show her, tell her, and there’s immediate carryover. She wants to do it right.”

Bailey has since made herself into one of the Mountain West’s top point guards. She’s scoring 10.1 points and grabbing 4.1 rebounds per game, and her 95 assists were tied for most in the conference at press time. She has also more than made up for her early exit in the season opener—at press time, Bailey ranked first in the nation in minutes played.

Bailey can probably cross that position change off her list as done. “I still can’t believe I’m playing point guard,” she says. “Coach La Rocque showed a lot of trust in me to be a leader. You have to know every play, every spot on the floor. Usually if there’s a mistake or someone doesn’t know the play, it’s your fault. But we needed a leader in that position, and having Coach behind me has really helped. The season’s almost over and we’re doing well, so I guess it’s working out.”

When the Mountain West Conference tournament begins March 7, Bailey will have one more task to accomplish: win the thing and lead UNLV to the NCAA Tournament.

UNLV hasn’t participated in the Big Dance since 2002, but Bailey does have limited tournament experience. She was a freshman at West Virginia during the 2016-17 season, when the Mountaineers made it to the second round, though she only saw the court for a total of one minute.

Bailey transferred to UNLV following that season and now has her hometown team poised for a potential March run. “I think I’ve lost in the first round of the [conference] tournament every year I’ve been here, so I definitely want to get past that point,” Thomas says. “I want to win it. We have a really good team, and I think we can do it.”

Such an achievement would definitely be worthy of an extra-aggressive cross-off. “I like to feel accomplished,” Bailey says. “That’s what I get my happiness from, accomplishments and getting things done.”