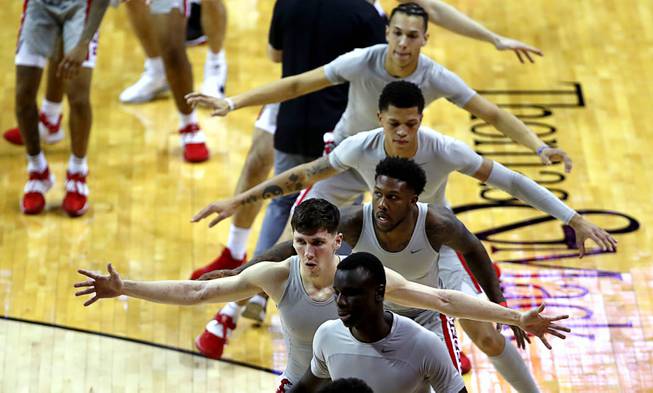 The UNLV Runnin’ Rebels warm up for a game against the Fresno State Bulldogs at the Thomas & Mack Center Friday, Feb. 26, 2021.

UNLV suffered perhaps its worst loss of the season on Wednesday, when middling Fresno State came to town and beat the scarlet and gray on their home court, 67-64.

After that dispiriting defeat, T.J. Otzelberger will try to rally his players to put forth a better performance tonight in the return game (8 p.m., CBS Sports Network).

UNLV doesn’t have a true point guard, but it needs to do a better job of distributing the ball than what we saw on Wednesday, when the team’s two highest-usage players—guards Bryce Hamilton and David Jenkins—combined to play 65 minutes and take 35 shots while recording zero assists between them.

It’s not the strength of either player, but that doesn’t matter anymore. Hamilton and Jenkins have to adapt to what the team needs, and that’s playmaking. If they move the ball to the open man and create better shots for their teammates, maybe UNLV will shoot better than Wednesday’s 3-of-15 from beyond the arc.

Otzelberger was especially frustrated by Fresno State’s 23 to 13 margin in free-throw attempts in the first game, and he credited the Bulldogs for being the more aggressive team and getting to the basket to force the issue. UNLV will be looking to reverse that tonight by attacking the paint, either through dribble penetration or post touches.

For a labored offense like UNLV’s, free throws are just that — an opportunity for free points. They need to take advantage.

Roll the dice on defense

Fresno State is a poor shooting team; the Bulldogs make 30.7% of their 3-pointers, which ranks No. 301 in the nation. UNLV played the odds in the first game by sagging off shooters and daring FSU to make jumpers, and it backfired as they hit a modest but still good for them 10-of-27 from long range.

Will UNLV use a similar defensive game plan tonight, or will Otzelberger have his defenders stay tighter on outside shooters now that they’ve been burned once? We should get an answer to that question on the first few possessions.