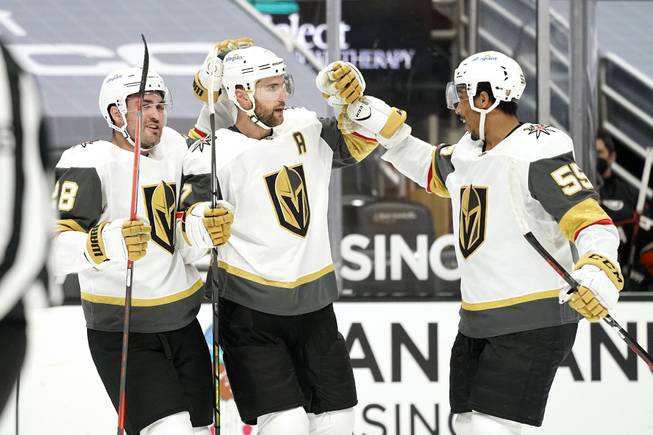 William Karlsson chuckled after the game when he was asked which of his two goals he liked better.

“I do like the first one,” the Golden Knights center said. “But I mean the second one was the game-winner so I have to go with that.”

Karlsson got behind the defense on both goals, and he usually doesn’t miss much when that happens. That was the case Saturday as he connected in the second period and in overtime to help the Golden Knights beat the Anaheim Ducks 3-2 at Honda Center.

“It was nice to get that first one because it’s been a couple of games and after that you get even more hungry, almost greedy, to score another one,” Karlsson said. “It’s great. Feels good and it’s always a confidence boost.”

It had been a while since Karlsson scored, dating back eight games to Feb. 5 against the Kings. He had just three goals on the season prior Saturday, though the pair of goals coupled with his nine assists on the year moved him to second place on the teams with 14 points.

Goals are always nice for the former 43-goal scorer, though.

In the second period he collected an outlet pass from Alex Pietrangelo while Anaheim was making a line change, and beat goalie John Gibson with three Ducks on his tail. In overtime, he went in alone after a Reilly Smith feed to score with 1:37 remaining until the shootout.

“He’s been a little snake-bit lately so it was nice for him to get a couple,” coach Pete DeBoer said. “Both happened so quickly and he was under pressure on both of them that he didn’t have a lot of time to think and just reacted. I thought two, obviously, key plays in the game.”

The Golden Knights only needed overtime after a contested Ducks goal in the third period. Vegas believed Rickard Rakell played the puck with a high stick, and that Adam Henrique’s ensuing game-tying goal should be negated. After a challenge, replay ruled Rakell played it clean, the goal stood, and Vegas was forced to kill a delay-of-game penalty.

It upped the intensity for the Golden Knights. They were 6-0-0 this season when leading after two periods, and came dangerously close to falling behind when an Anaheim shot hit the crossbar with under three minutes to play. After holding a third-period lead against the last-place Ducks, zero points in the standings or even one would have felt like a disappointment.

Instead, the Golden Knights reached overtime, and after a couple of terrific stops by Marc-Andre Fleury on Isac Lundestrom shots to start the extra period, Karlsson finished off the win.

It wasn’t a pretty way to win, but the Golden Knights will take the two points and prepare for a first-place showdown with the Minnesota Wild on Monday.

Karlsson continued his torment of the Ducks, who drafted him in 2011 and traded him in 2015. He had a hat trick in Vegas’ last trip to Anaheim last season and his 12 goals against them are his most against any opponent.

As luck would have it, in the postgame press conference Karlsson was sitting next to defenseman Shea Theodore, who was Anaheim’s first-round pick in 2013 and came to Vegas in a trade during the expansion draft.

Karlsson and Theodore are two original Golden Knights who thrived the first year with that misfit mentality that became so famous. Turns out those feelings don’t just go away.

“Me and (Theodore) always say before the games, these guys didn’t want us,” Karlsson said. “There’s always a little extra motivation going against these guys.”