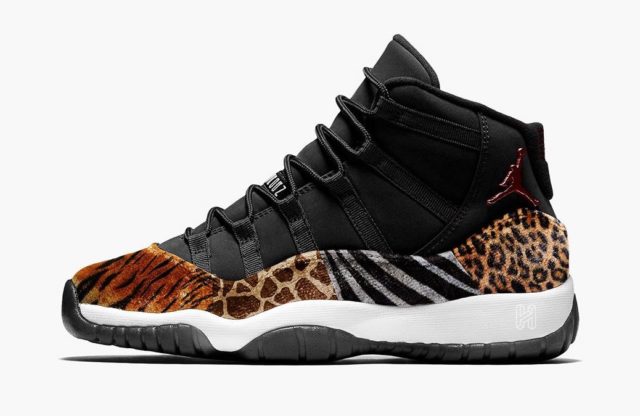 This wild new Air Jordan 11 will be a women’s exclusive.

Every single year, Jordan Brand blesses sneakerheads with a ton of new shoes during the Holiday season. November and December are festive times and during these moments, it is important to go out and get some dope sneakers that will have your family members impressed at any outings. The Jordan 11 gets particular attention during this time as every single December features one or two new Air Jordan 11 releases. Later this year, we are expected to get the “Cool Grey” retro but now, an “Animal” model is also expected to drop.

In the image below, courtesy of KicksOnFire, you can see that the “Animal” model will contain a black upper, while the strip that goes around the silhouette will feature various animal patterns. From tiger to cheetah to leopard to zebra, there are plenty of different animals to behold here. Overall, it makes for a dope new offering, that is set to be a women’s exclusive.

An exact release date has not been announced for these although you can expect them to drop sometime closer to Christmas as this is a Holiday release. In the meantime, stay tuned for any updates as we will be sure to bring those to you. Also, let us know what you think, in the comments below.