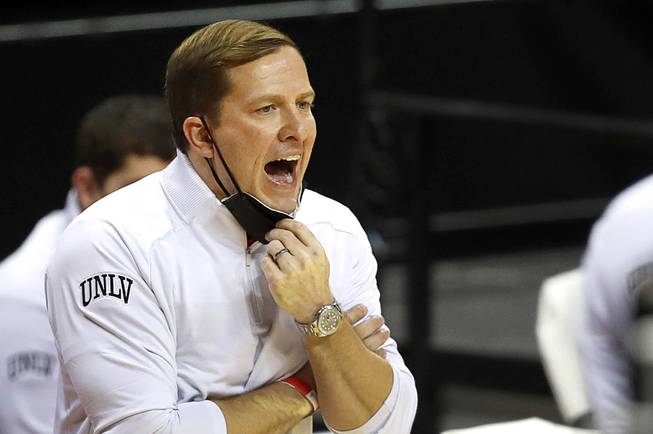 After taking the UNLV job in the spring of 2019, coach T.J. Otzelberger opted not to bring in any freshmen for his first season, instead exclusively recruiting college and juco transfers to immediately plug into the roster. It worked, as the veteran-laden 2019-20 team tied for second place in the Mountain West and appeared poised for a postseason run until Elijah Mitrou-Long—one of those instant impact transfers—suffered a season-ending injury.

But while he had success with that approach in his first year, Otzelberger didn’t want to continue relying on transfers to sustain his program. So last offseason he and his staff went about recruiting his first true freshman class at UNLV.

Otzelberger started out with the goal of adding four freshman in the Class of 2020, but as more roster spots opened the number swelled to six players—a big class, and a vitally important one in Otzelberger’s quest to turn around the program.

“We knew that as you build a program, you’ve got to get that one recruiting class where you get guys into your program who are going to develop, get better, have a sense of pride in the program being successful,” Otzelberger said. “At the onset, we didn’t plan for exactly six. We knew we wanted at least four, and then it turned into six.”

As the 2020-21 season draws to a close, the results of that class appear to be mixed, and it’s still an open question as to whether they’ll prove to be a foundational group for UNLV.

Only two freshman have earned spots in the rotation: Nick Blake, a 6-foot-6 guard, and Devin Tillis, a 6-foot-6 forward. And they came from opposite ends of the recruiting spectrum, as Blake was rated as a Top 100 player in the nation while Tillis went largely unranked through his senior year of high school.

Blake was thrust into the unfamiliar role of point guard when Marvin Coleman went down for the season with an injury, and he has started 10 of 23 games while averaging 7.2 points and 2.7 assists. He has flashed very good athleticism and skill, such as when he went behind the back to complete a layup in a win over Utah State. Conversely, Blake has also had his share of freshman moments, such as when he botched two breakaway dunks later in that same game against Utah State.

Tillis got off to a slow start due to a series of nagging injuries but has since rounded into form, with Otzelberger inserting him into the starting lineup for the past four games. Tillis is posting 3.8 points and 3.6 rebounds in 18.7 minutes.

Otzelberger believes Blake and Tillis will be integral to the future of UNLV.

“Nick has done a tremendous job throughout the season with having to stomach a lot of point guard responsibilities,” Otzelberger said. “He’s a willing passer, a guy that talent-wise and athletically continues to take leaps and bounds. We think he can really be a guy moving forward, because of his versatility to play multiple positions and guard multiple positions, who can be a cornerstone. What Devin brings to the team, more than his play, is his understanding for the game. He’s a guy who’s a future captain.”

Aside from Blake and Tillis, UNLV has gotten next to nothing from the rest of the 2020 recruits. Guard Isaac Lindsey has missed the entire season due to a hip injury, while point guard Donavan Yap and center Jhaylon Martinez have not been able to earn playing time (16 total minutes for Yap, zero for Martinez).

Forward Reece Brown has received spot minutes (9.2 minutes in 14 games played) but has been used in a very limited role as a screener and rebounder.

Lindsey, Yap and Martinez were 3-star recruits rated outside the Top 300, while Brown was unranked during his post-grad year.

Otzelberger said the transition from high school to Division I college ball has been more difficult than normal for Yap, Martinez and Brown due to the limited offseason schedule. UNLV had to cancel its exhibition trip to Canada due to COVID-19, and much of the non-conference schedule was scrapped as well.

In hindsight, expanding the incoming 2020 class to include developmental prospects looks like a bad move.

“This wasn’t the year where you wanted to have six freshmen,” Otzelberger said. “They didn’t have a summer or a fall, and we initially planned a summer trip. If we’d have known COVID was coming we would have had a different plan of attack. By the time the season started we had so little time with them and the ones who played were thrown into the fire and had to figure it out on the fly.”

The fact that UNLV has gotten so little production from four of their freshmen is exacerbated by who they missed out on. Otzelberger was in the mix to land a couple of highly-ranked local recruits, 5-star forward Julian Strawther and 4-star wing Mwani Wilkinson, but they chose Gonzaga and LSU, respectively. Strawther is averaging 3.6 points in 8.3 minutes for the No. 1 team in the country, while Wilkinson has started 14 games and posted 4.0 points and 3.0 rebounds.

It’s not a stretch to imagine two or three of UNLV’s seldom-used freshmen to leave the program in the offseason in search of more playing time at another school.

After testing out both extremes in his first two years in Las Vegas, Otzelberger envisions a more balanced mix of true freshmen and experienced transfers making up UNLV’s rosters going forward.

“You can go the quick-fix route, but I think that’s risky if you’re trying to build long-term,” Otzelberger said. “At the same time, I understand we need to get older, more mature and more experienced players out there. One of the benefits of last year was that as a group of older guys, they had an understanding of how hard you have to play every possession, how physical it is and how you have to be mentally ready for the long haul of the season. At this time last year we were playing harder than anybody.”

As for the Class of 2020, Otzelberger still thinks they’re going to push the program in the right direction.

“We wanted to bring in that group, a young group that could grow together. As things continue to move forward, some of those guys are going to end up being the right guys.”