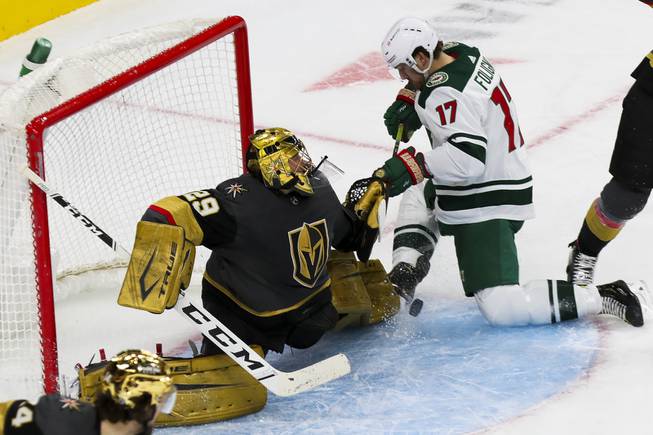 It’s been awhile since the Minnesota Wild were known as an offensive juggernaut. The Wild have long been known as a defensive-first organization and have ranked near the bottom of the league in goal-scoring the past few years.

The Golden Knights, though, got their first taste of the new Wild in their first meeting.

Vegas allowed four goals Monday, all at 5-on-5, the most given up in a game at even strength this season and second-most allowed in a game overall. The Golden Knights have struggled to break Minnesota’s defensive structure, but they’ll have a new force to compete with when Vegas and the Wild clash at 7 p.m. today at T-Mobile Arena.

“I honestly think that they’re way better than they were before,” Vegas forward Jonathan Marchessault said. “It kind of, personally, caught me by surprise to see how good they were this year because we didn’t really know what to expect because they had a lot of changes in their lineup.”

The Wild are fast and dangerous with the puck, led by 23-year-old rookie Kirill Kaprisov (17 points) and 24-year-old Jordan Greenway (15 points). Forward Joel Eriksson Ek is having a breakout season with eight goals, and the team’s 3.21 goals per game is decimal points off the division lead.

The defense hasn’t gone away either. Minnesota boasts a dangerous blue line led by captain Jared Spurgeon, and this season the goaltending has been there too, their biggest bugaboo from last year. Kaapo Kahkonen and Cam Talbot have combined for a .916 save percentage this season.

“They were on a six-game winning streak and that’s not just by fluke,” forward Chandler Stephenson said. “They’re big, they’re heavy and they make a lot of things happen.”

The Golden Knights’ win Monday was big for a few reasons. It kept them atop the division, was the first third-period comeback of multiple goals that resulted in a win, and showed they could beat the Wild. Prior to Monday, Vegas was 2-6-0 all-time against Minnesota, the worst points percentage against any opponent, and won of those wins was a shootout.

Vegas looks like its going back to its usual top-six after a four-game hiatus. Max Pacioretty and Mark Stone were back together at morning skate with Chandler Stephenson between them, and the inaugural season line of Jonathan Marchessault, William Karlsson and Reilly Smith were reunited as well.

Marc-Andre Fleury is expected to make his 10th consecutive start in the Vegas net. He has a .935 save percentage this season in 13 games this year, and has allowed two goals or fewer in all but four of them.