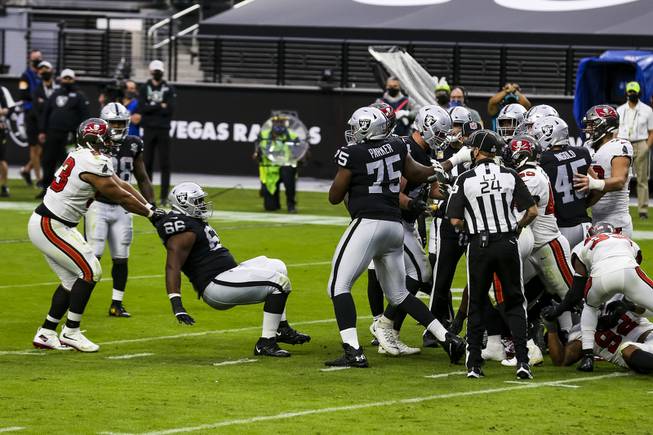 The Raiders made big free-agency splashes in each of the last two years with general manager Mike Mayock springing for highly paid players on the open market.

Don’t expect Mayock to proceed the same way when his third season with the team officially begins on Wednesday, March 17, the start of the new NFL league year and free agency. In his first news conference since the end of the season, Mayock on Wednesday cautioned that the Raiders’ approach may be more tempered this year.

“I think we’re going to be active — the question is, at what level?” he said. “We’ve been active with players on Day 1 and Day 2 the past couple years. I think there’s going to be a lot of depth in the free-agency market in this particular year. I think there are going to be more veterans on the market and it’s incumbent on us to stay patient.”

The franchise’s financial situation is the primary reason why it’s unlikely to reprise something like the record-breaking contract tackle Trent Brown signed in 2019 or even the pricy three-year, $36 million deal given to linebacker Cory Littleton last year.

The Raiders currently have no cap space with more than $190 million in player contracts, according to Over The Cap. The final salary-cap for the upcoming season will be finalized in the coming days but it’s expected to be around the previously announced floor of $180 million.

That’s a precipitous drop from the $198.2 million last season, a result of lost revenues from staging a season mostly without fans in attendance in the midst of a pandemic. It will mark only the second decrease since the salary cap was introduced in 1994.

“If you go back two years and say, ‘Where’s the cap going to be this coming season,’ the answer would have been plus or minus $225 million and we’re looking at $180 today,” Mayock said. “It’s simple math. The reality is, every team in the league is going through conversations like never before as far as, ‘What’s the best composition of your locker room? Where do we have to make moves? How do we make those moves?’”

Although the Raiders’ situation may sound dire on the surface, it’s neither debilitating nor unique compared to the rest of the NFL. Eight teams are in worse current cap situations than the Raiders, and several more have less flexibility than the Raiders to create space going forward.

Las Vegas can clear tens of millions in space by releasing players, including several of the highest-paid on the roster, with little to no penalty in the form of dead money to its cap. The only question now is which players Mayock and his staff will cut ties with, and which ones they’ll keep.

He offered few hints on Wednesday, refusing to address a report that guard Gabe Jackson has been informed that he will be among the casualties. Jackson, one of the team’s longest-tenured players since it drafted him out of Mississippi State in 2014, clears $9.6 million in cap space.

Mayock said “the jury is still out” on Brown, who could offer the biggest savings. The tackle is set to make $14 million this season — second on the team behind quarterback Derek Carr’s $22 million salary — but can be cut with no hit to the cap.

Mayock emphasized that he wasn’t sure how much money the Raiders would have available to spend in free agency. But he must have some idea at this point.

He also spoke of necessity for a team to be “self-aware” with its roster needs, which for the Raiders stretch wide after missing the playoffs for the 18th time in 19 seasons. Las Vegas requires help at every level of its defense and may also need to allocate significant capital to the offensive line depending on the fate of Brown and guard Richie Incognito, who’s owed $5 million unless he’s cut.

Mayock wants to build through the draft, scheduled for April 29-May 1 in Cleveland this year, but it’s impossible to do that exclusively. The Raiders will have to be involved in free agency, even if it’s not as prominently as earlier in Mayock’s tenure.

“We’ve got some holes we’d like to fill in free agency,” Mayock said. “It might be Day 1. It might be the third week when things calm down and there are still veteran players out there who are good football players. We’re just going have to marry up our resources with the market, and right now it’s too early to tell you what that’s going to look like.”