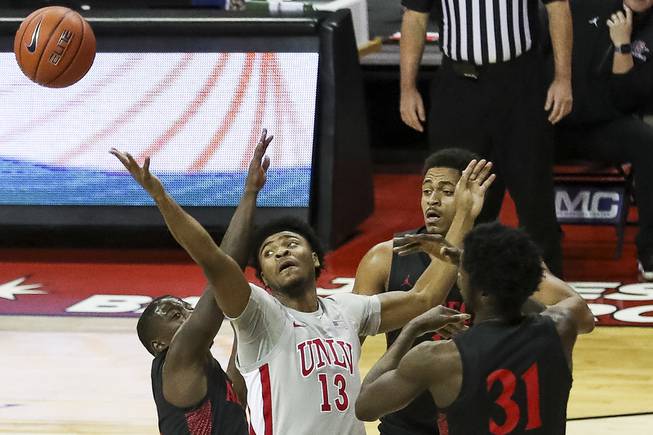 UNLV went into Wednesday’s matchup with No. 19 San Diego State well aware that their opponent plays some of the toughest defense in the country. That’s been SDSU’s calling card for years now. But the scarlet and gray still weren’t prepared for the all-out defensive assault the Aztecs unleashed in an eventual 71-62 win at the Thomas & Mack Center.

Every dribble was in peril and every pass was contested as San Diego State forced UNLV to thread the basketball through an exactly basketball-sized opening, possession after possession. The unrelenting pressure eventually wore down T.J. Otzelberger’s team, allowing SDSU (20-4, 14-3 Mountain West) to pull away and clinch another regular season conference championship.

Jenkins said there just weren’t any weaknesses for UNLV to exploit on the offensive end.

“First off, they’re physical,” Jenkins said. “When you try to drive by them they bump you off your line. They switch hard. They get up on shooters. And one thing I noticed, they talk during the whole game. When you’ve got a team that communicates like that the whole game, there’s not many mistakes that they’ll make.”

UNLV actually hung around in the first half through a mix of hustle, Jenkins’ shooting, and plain old good fortune (a San Diego State player somehow airballed a wide open dunk). The teams were knotted, 28-28, with less than two minutes remaining when San Diego State put on the clamps; UNLV missed its next seven shots from the field (spanning both halves) and the Aztecs went on a 14-0 run to build a lead that would prove insurmountable.

UNLV got as close as 53-45 midway through the second half, but every time they made a move San Diego State got the stops necessary to snuff out any true comeback attempt.

“I really thought when we had it at 28-all prior to half, that 7-0 run just before halftime hurt us,” Otzelberger said. “We’ve got to be more stubborn, more gritty and stay the course and not have those runs against us, because against a good defensive club like that it’s hard to make up those runs.”

While Jenkins had success from beyond the arc (7-of-14), junior guard Bryce Hamilton was completely swallowed up in the mid-range area by the San Diego State defense. Hamilton, who came into the night averaging a team-best 18.5 points per game, finished with just nine points on 3-of-14 shooting.

SDSU appeared well attuned to where Hamilton wanted to go and the Aztecs made sure to always have a hand up. Hamilton connected on just 2-of-10 mid-range attempts.

Otzelberger said San Diego State’s ability to switch and play strong man defense made it difficult to score in isolation.

“A lot of times they’re switching 1 through 5, ball screens, handoffs, even late they were switching some screening action,” Otzelberger said. “It stagnates your offense. It forces you to play 1-on-1, or that’s what they try to get you to do. And then you see from us tonight there were too many possessions where one guy was dribbling and there wasn’t enough movement.

“They’re able to do that because they’ve got really good athleticism and take a tremendous sense of pride defensively,” he continued.

San Diego State’s senior duo of Matt Mitchell (19 points) and Jordan Schakel (16 points) did most of the offensive damage for the Aztecs.

UNLV is now 11-13 on the year and 8-9 in the Mountain West with one game remaining (Saturday at Wyoming).