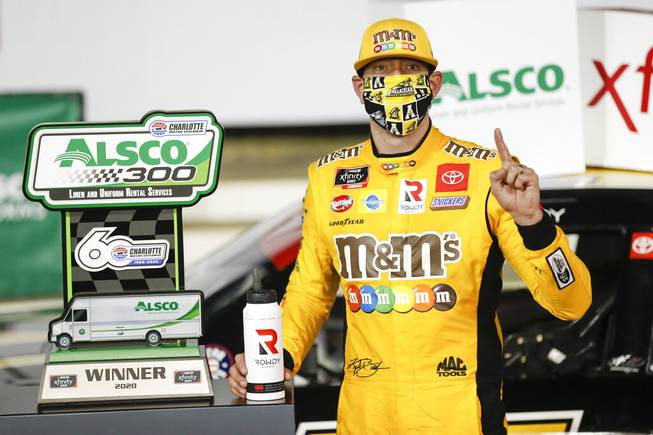 NASCAR used “best season ever” as a tagline to promote its new year, which began in February with the Daytona 500.

The slogan was a bit hyperbolic, but there might have also been some truth in advertising, as the racing organization arrives in Las Vegas for an early-season stop with quite a bit of momentum. Here are five reasons why NASCAR’s March 5-7 takeover of Las Vegas Motor Speedway—capped by Sunday’s Pennzoil 400 Cup race—feels like more than just another race weekend.

Although T-Mobile Arena ultimately beat it to the punch with Monday’s Golden Knights game, Las Vegas Motor Speedway was the first professional sports venue in Nevada approved to host fans since widespread coronavirus-fueled social distancing measures began a year ago. The state signed off on 15% capacity at each of the weekend’s three races, meaning 12,500 fans will be allowed at the track per day.

Even a diminished attendance should benefit the atmosphere and make for a welcome sight on television, even if the visual is quite removed from the usual mass of bodies in the grandstands and RVs in the infield.

Sunday’s race, the Pennzoil 400, sold out quickly, but at press time, tickets could be found on secondary ticket sites for $200 and up. Tickets for Friday’s Bucked Up 200 truck race and Saturday’s Alsco 300 Xfinity Series race were still available at lvms.com, starting at $29.

The Durango High graduate Busch brothers are always prime attractions at their hometown track, but the attention is amplified this time around. That’s because Kurt Busch scratched a win at Las Vegas Motor Speedway off his bucket list the last time NASCAR was here, capturing the checkered flag in last September’s South Point 400.

His younger brother, Kyle, won in Las Vegas in 2009. It’s now a race inside a race to see if the 35-year-old Kyle or the 42-year-old Kurt can win a second time here—and who can do it first.

They’re both coming off relative down years with only one win apiece in 2020, but they’re still known as two of the most talented drivers in the world. Kyle has won the Cup Series championship twice—in 2018 and 2019—and Kurt won his own title in 2004.

For the first time in years, neither Kyle Busch nor Kurt Busch is the most likely local winner for race weekend. That distinction goes to 22-year-old Noah Gragson, one of the favorites in Saturday’s Xfinity race.

Gragson attended Bishop Gorman for two years before fully committing to his racing dreams. He has shot up the ranks ever since, and through three Xfinity races this year, he’s driven one of the fastest cars. It just hasn’t translated to a victory, much to his frustration.

Gragson has crashed twice, including last week in Miami-Homestead, where he held a dominating lead with three laps to go before David Starr, whom he was lapping, blew a tire and caused a collision.

Gragson created a stir afterward when he called drivers like Starr “dipsh*ts” during a live interview on Fox Sports 1. Already a polarizing figure, Gragson figures to be a staple in NASCAR for years to come.

The Cup Series’ winners the past two weekends have been 23-year-old William Byron, who claimed his second career victory, and 26-year-old Christopher Bell, who won his first race.

The pair of long-shot wins by talented young drivers fit well with what NASCAR is branding a new-look season. And the trend could continue, with several others in line to compete throughout the schedule, including a pair who have attracted celebrities to build racing teams.

Some traditions will stay intact even without swarms of out-of-towners and capacity crowds at the Speedway. Bookmakers still intend to make the Pennzoil 400 the biggest race betting event of the year, with long menus of driver matchups and proposition bets available for wagering, in addition to traditional future odds to win.

The annual Las Vegas stop on the calendar has always fallen between the Super Bowl and the start of March Madness, allowing it to be its own betting spectacle. That won’t change, and it’s just another reason why this year’s race weekend could live up to NASCAR’s overall promise and prove to be the best one yet.